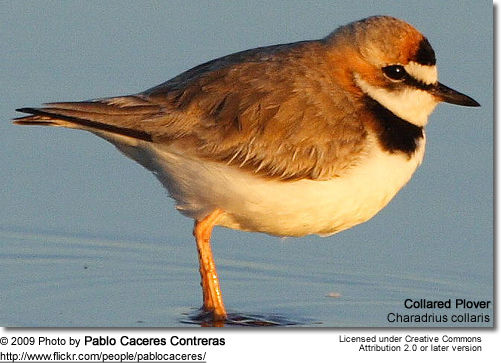 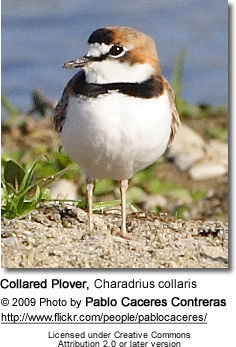 The Collared Plover, Charadrius collaris, is a small wader in the plover bird family.

It breeds from Mexico south through Central America and most of South America. It also occurs on some of the southern Caribbean islands, and both Trinidad and Tobago. It appears to be mainly sedentary, although there is some evidence for limited seasonal movements.

It nests in a bare ground scrape above the tide line or inland, and lays two brown-blotched creamy eggs.

The male has a ground display in which he chases the female. 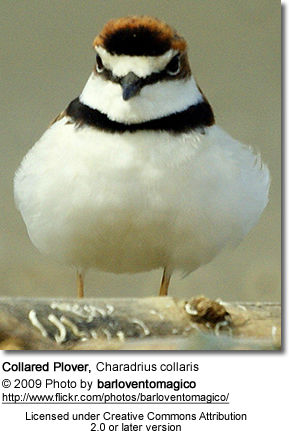 Its upperparts are brown and the underparts white in all plumages. Adults have a black breast band. The male has a white forehead, bordered above by a black frontal bar, and below by a black stripe from the bill to the eye. The midcrown and nape are chestnut and the legs are yellow. In flight, the flight feathers are dark with a white wing bar, and the tail shows white sides. The flight call is a sharp metallic pip.

The female Collared Plover is usually very similar to the male, but some individuals can be sexed by a brown tinge to the black areas. Immature birds lack any black on the head, and the breast band is replaced by brown patches on each side of the chest.

Similar Species: Snowy Plover is similar in size and structure to this species, but is paler above, has dark legs, and never has a complete breastband. Semipalmated Plover is larger, thicker-billed, and has a pale collar. Ironically, it is the lack of a pale collar which gives Collared Plover its English language and scientific names.

Behavior: This species is not particularly gregarious, and seldom forms flocks. It is usually very wary. 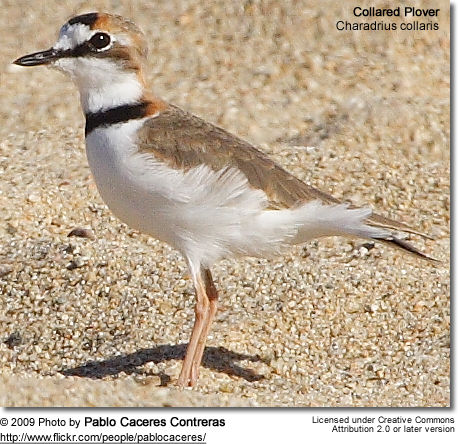 Collared Plover feeds on insects and other invertebrates (= animals without internal skeleton, such as larvae, earthworms, millipedes, snails, spiders), which are obtained by a run-and-pause technique, rather than the steady probing of some other wader groups.