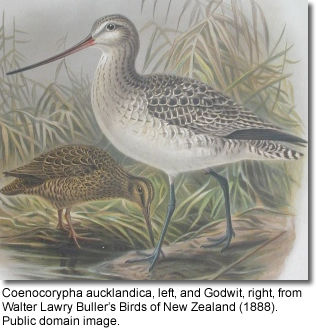 The Coenocorypha are a genus of tiny birds, also known as the New Zealand snipes, which are found in the Outlying Islands of New Zealand. There are currently two widely accepted extant species, two extinct species and several subspecies, but the taxonomy of the genus is currently under debate and these subspecies have been raised to full species by some authors. One as yet undescribed species or subspecies was discovered off Campbell Island as recently as 1997. The genus once ranged from Fiji and New Caledonia, across New Zealand and down into New Zealand's sub-Antarctic islands, but predation by introduced species has drastically declined their range.

The relationship between the New Zealand snipe and the snipe of the genus Gallinago is uncertain; the Coenocorypha are sometimes thought to be a relict of an ancient lineage, however insufficient research has been done to prove this. The first specimen, was collected from the Auckland Islands during the voyage of the Erberus and Terror and was described by George Gray in 1845. Ten years later he assigned the species to its own genus. With the exception of the Chatham Island Snipe and the Forbes's Snipe (described from fossils found in the Chatham Islands), all subsequent New Zealand snipe collected were assigned as subspecies to the original species, known as the New Zealand Snipe. Subspecific forms were described from the Snares, Little Barrier Island, Stewart Island and the Antipodes Islands.

A morphological study and comparisons of plumage and behaviour led some authors to accept that the Snares Islands, Little Barrier Island, Stewart Island were all species instead of subspecies of the Auckland Island form and raised the possibility that the Antipodes Island form might be a separate species.

In 1997 a previously unknown form of New Zealand snipe was discovered on Jaquemart Island off Campbell Island. The Campbell Island Snipe has yet to be formally described scientifically but is considered to be another species in the radiation of New Zealand snipes. Fossil remains of Coenocorypha have also now been discovered on the islands of New Caledonia, Fiji and Norfolk Island. Fossil evidence has also shown that the Little Barrier Island form was once widespread across North Island and the Stewart Island form across South Island; both species are now extinct.

The Coenocorypha snipes resemble Gallinago snipes, although they much smaller, stockier and have shorter bills. Overall they have long bills and short necks, wings and tails. They measure between 19-24 cm long, with wingspans of between 28-35 cm, and weigh between 75-120 g. The smallest species is the Chatham Island Snipe. Their plumage is overall brown, most species have a dark eye stripe. The scapulars (shoulder feathers) on the wings are mottled with some species having white tips.

The breeding biology of some of the Coenocorypha snipes has been studied in some detail. They are mostly monogamous (although occasionally some males attempt polygamy) and defend territories from other breeding pairs, although non-breeders are tolerated inside territories. Pair formation occurs some months before breeding, and males feed females as part of the courting rituals. Before breeding New Zealand snipe also participate in aerial displays with calls followed by a non-vocal roar created by diving birds driving fast moving air across the rectrices (the long flight feathers of the tail). This display is thought to be the origin of the Māori legends about the or hakawai; the calls are known to scientists by that name as well.

Both sexes choose the nesting site, although only the female builds the nest. The usual clutch size is two eggs, laid three days apart. Incubation duties are shared between the sexes, incubation taking 22 days. Where a male has two females in its territory it will incubate at just one nest, the female at the other has to incubate alone, taking 38 days to hatch chicks.

After hatching the pair splits, with each member if the pair taking one chick and raising it. Chicks are fed for around 41 days, and stay with the parent for another 20 days after that. The chicks Chatham Island Snipe matures faster than the other species and is only fed for thirty days and becomes independent at 41 days. Parental care in the extinct South Island Snipe is also thought to have been different, with studies conducted in 1923 and 1930 showing that both parents cared for a single chick. Nothing is known about the parental care of the North Island Snipe, the Forbes's Snipe or the snipes of Fiji, New Caledonia or Norfolk Island.

The Coenocorypha snipes are carnivorous, feeding on invertebrates found by probiing in the soil and in compacted vegetation. Feeding is both diurnal and nocturnal, with most hunting occurring at night and in the early morning. Bouts of feeding are characterised by continuous probing the soil with the full length of the bill. The ground is covered systematically, with about 18 holes for ever 100 cm² of soil. Prey is presumably detected by touch and possibly by Herbst's corpuscles, clusters of cells that can detect changes in pressure and have been shown to be used by other shorebirds to detect prey. Smaller prey is swallowed with the bill still probed, as the mandibles are flexible and the prey can be manipulated in the soil. Larger prey items are removed from the soil for easier manipulating and swallowing. The most common prey items taken include earthworms, amphipods, beetle adults and larvae and the pupae of other insects.

The Coenocorypha snipes evolved on oceanic islands without land mammals and were ecologically naive to mammalian predators. When humans arrived on the islands they lived on they brought with them Polynesian Rats and later larger more aggressive predators such as Black Rats, Stoats and feral cats. With the arrival of these predators Coenocorypha snipes quickly became extinct, with the species in Fiji, New Caledonia and Norfolk Island becoming extinct in prehistory. Around New Zealand snipes survived on rarely visited offshore islands and on the sub-Antarctic islands. The North Island species survived until the arrival of European settlers, and the last South Island Snipe survived off Stewart Island until 1964, when rats reached Big South Cape Island. The island had also been the last refuge of the Bush Wren and the New Zealand Greater Short-tailed Bat. Attempts were made to capture some snipe (and wrens) for translocation to a safe island, but only two snipe were caught and both died the next day.

Today the remaining species are a conservation priority. Techniques to translocate snipe without killing them have been developed, and a small group of Snares Island Snipe have been established again off Stewart Island. Campbell Island Snipe have benefited from the removal of rats from Campbell Island in 2001; they have recolonised the main island from Jacquemart Island and begun breeding there again.