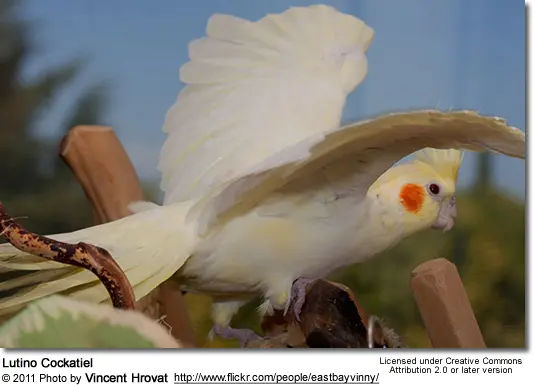 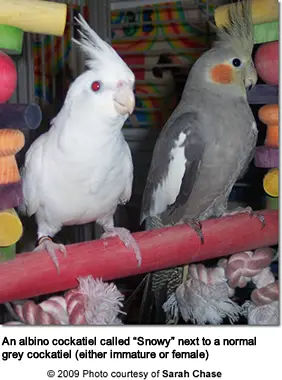 Scroll down for information on the many cockatiel mutations that have been developed in aviaries. Sexing information is also provided whenever available.

Immature males and females look alike and cannot be visually sexed. Once cockatiels have gone through their first molt (at six to nine months), the adult coloration shows, although at that time they don't attain their final (adult) coloration. Still, they typically have enough to make some sexing possible.

Other than the visual sexing that can be performed on mature birds, some breeders also check the pelvic bones as means of sexing a bird. The basic idea is that the pelvic of female cockatiels are more flexible and further apart -- as the egg has to be able to pass through it. It is actually pretty similar to the difference seen in human males and females.. Women usually have wider pelvic bones than males. This applies to cockatiels as well. However, just as is the case with humans, females can have "boyish" figures with narrow hips; and some males have wider hips. This also applies to cockatiels. Additionally, immature birds have wider pelvic bones. This all makes this method of sexing "iffy" at best.

Information pertaining to sexing the below mutations have been added (as available) ...

A lot of the excitement for cockatiel breeding can be explained by the many beautiful mutations that have occurred over the years.

Starting with the normal grey, then pieds, cinnamons, lutinos and pearlies have resulted from matings. Later on white-faces, silvers and albinos have stirred up excitement in aviculture. Recently an orange-crested cock with the orange cheek patch extending into the face and crest has occurred.

Breeders are waiting to see what mutation will pop up next, which explains the enthusiasm and joy they get from their hobby of breeding cockatiels.

The Normal Grey is the original bird native to Australia.   The male Normal Grey has grey feathers over his entire body, with the exception of the white wing bars, yellow face and bright orange cheek patches.  Both sexes have those broad white bars along the edge of each wing.

Females and young cockatiels (before 1st molt) have dull orange cheek patches; their faces are not bright yellow, but more grey with some yellowish infusion. The tail feathers have a white or yellow barring on the underside.

If your normal grey cockatiel has a few white or yellow feathers on the back of his or her neck and head, your cockatiel is split to the recessive mutation Pied. 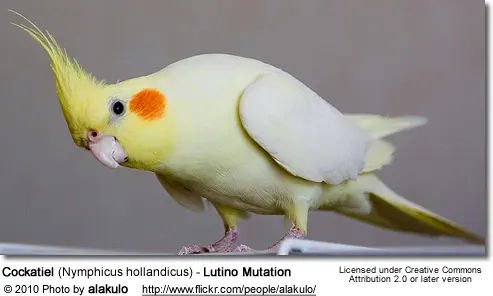 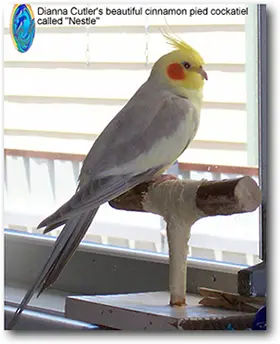 Lutinos: The Lutino is a yellow-white bird with orange cheek patches and red eyes.

In lutinos, baldness can occurs behind the crest. The bald spots were especially pronounced when the lutino mutation was first bred and in the following years after that. A lot if inbreeding of this mutation caused this undesirable bald patch, which doesn't diminish the tiel's pet quality - but is not a desired trait for breeding. Breeders have been working on reducing / eliminating the bold patch and have shown great success in doing so.

It is very hard to distinguish mature cocks from hens. Although yellow barring on the underside of the tail are visible in females.

Pieds: This is a striking combination of yellow or white with light or dark grey. Lutino Pieds would have darker yellow "splotches." The amounts and placement of color vary widely. Even, symmetrical marking is desirable.

Clear Pied: A clear pied looks identical to a Lutino or even a White-face lutino. One significant difference is that a clear pied does NOT have red eyes, whereas a Lutino and a White Face Lutino do.

Pearly Pied: The colors are the same as the pied with the pearling only on portions of the wings. The bird is clear yellow or white, with areas of grey over the rest of the body. 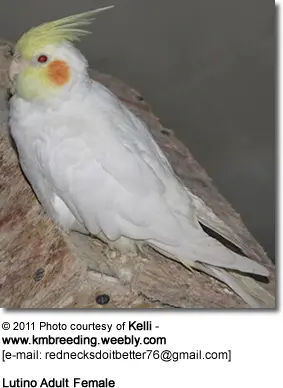 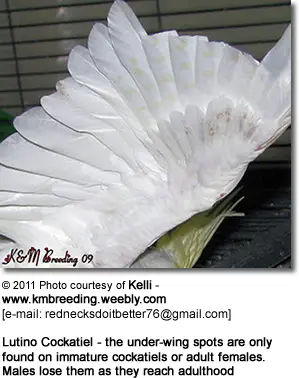 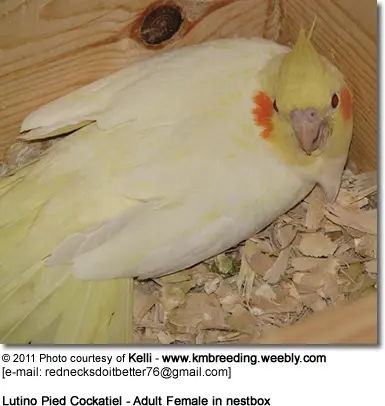 Cinnamon: This mutation is similar to the normal with grey areas replaced by tan to cinnamon brown color.The Cinnamon mutation gets it name from the cinnamon color, which has been described as a brownish-grey color.

Cinnamon Pieds: The overall plumage is a combination of cinnamon brown and yellow, again varying in intensity of color and placement of markings.

Cinnamon Pearlies: The pearled feathers are yellow edged with the various shades of cinnamon.

Cinnamon Pearly Pieds: This mutation is similar to the pearly pieds with cinnamon brown over areas that would otherwise be grey.

Pearly / Lacewings: The "term" pearly refers to the lacings or pearl spots of yellow or white on the backs, nape, and wings. This mutation is also commonly referred to as "lacewings" ... Yellow Pearls are sometimes called Golden Pearls. White pearling is sometimes called Silver Pearl.  Pearling in a whiteface cockatiel is always white.The lacings should be extensive and consistent.

Females retain their pearly coloration into adulthood, while male lose their pearlings after their first molt (turning into a Pied cockatiel - rather than pearly pied).

Fallows: The body color is a very pale cinnamon suffused with yellow, the face yellow and the eyes red.

Olives: Feathers have a green wash and a light spangling pattern. 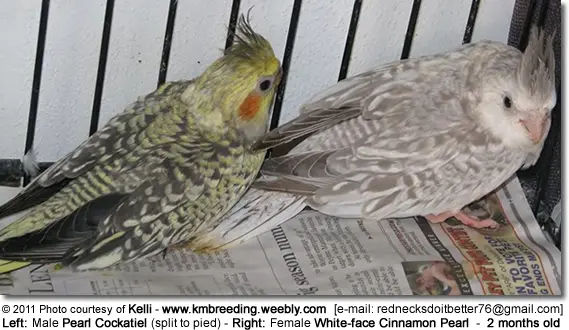 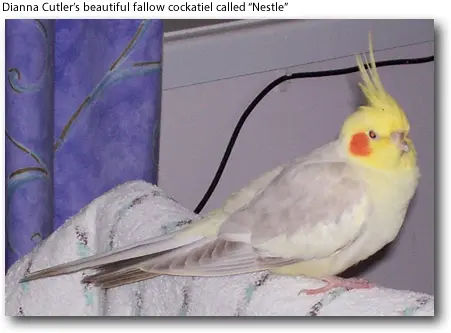 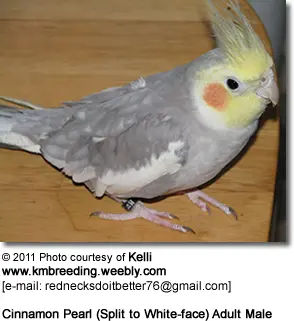 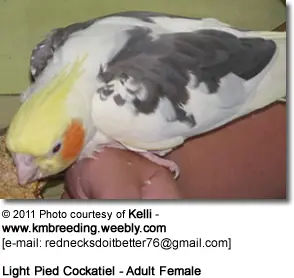 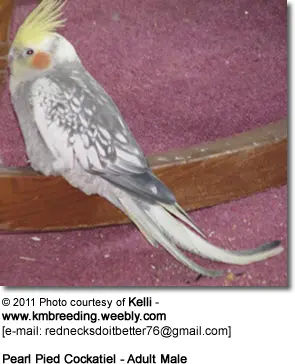 The Emerals Cockatiel, also known as Spangled Cockatiel or Olive Cockatiel, has small patches or splotching's of varying yellow to grey colors. 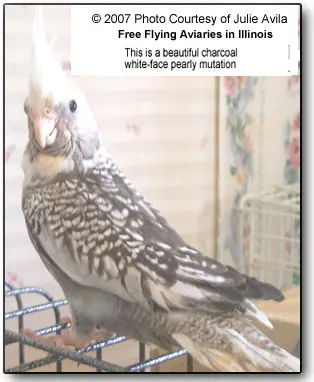 
This beautiful whiteface mutation lacks the orange cheek patch and yellow pigmentation.  Mature adult males have a white face as opposed to the yellow mask typical of the other varieties.  Some of the more beautiful combinations include the Albino (all white), Pied Whiteface, Cinnamon Pied Pearly, Pearly Whiteface, and several others.

Albinos are pure white with no color what so ever. Their eyes are red. In females, barring is visible on the underside of the tail. Cockatiels do not have a true "albino" mutation as they don't carry the BLUE gene. They are commonly referred to as "albinos" as they are all white with red eyes. However, they should more appropriately be called "White-face Lutino."

Silver Mutation: The plumage is a light, silvery grey. The eyes are red.

Single-factor dominant silver. Feathers are a darker metallic silver, with orange check patches and black eyes, feet and beak (except in pieds, which have flesh-colored feet and beaks. A skullcap of darker pigmentation is visible on the head. 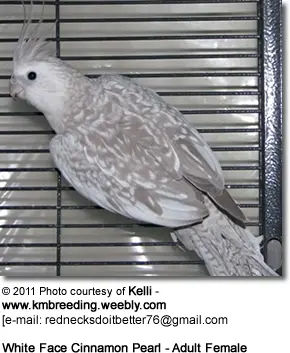 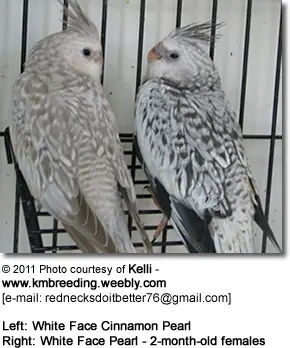 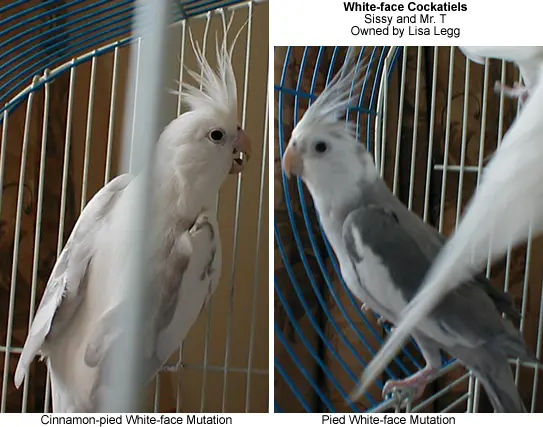 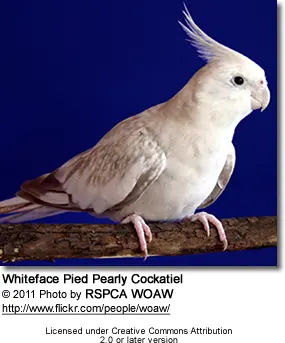 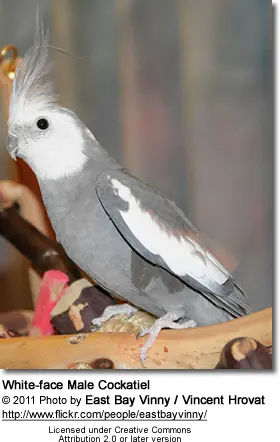 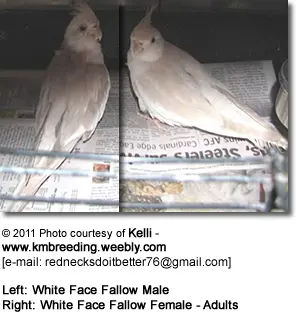 I have a natural Grey male…

I have a natural Grey male cockatiel. He looks like a standard grey, the only different is his stomach and neck with little yellow colour. Is he still consider just grey or some pied?

It's possible that she is a…

It's possible that she is a very light pied. That's when there is very little white or yellow coloration. It can be as little as a few stray feathers.