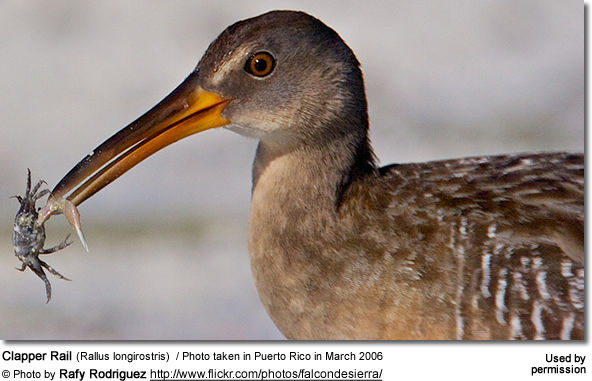 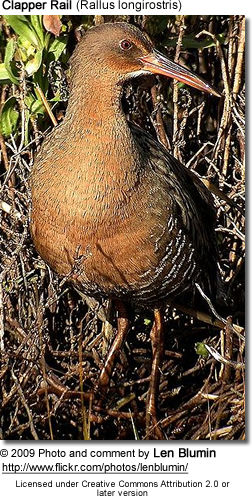 Within their range, they regionally referred to as Light-footed Rails, Long-billed Clapper Rails, Marsh or Mud Hen or Salt Marsh Clapper Rails.

Some authorities (such as the Checklist of Birds of the World, 2:159, 1934) treat the western Clapper Rails as races of the very similar King Rails. There are arguments for and against this theory. They do share many physical similarities and are known to interbreed in areas where their ranges meet. However, the Clapper Rails show a definite preference for salt water marshes and the King Rails typically frequent fresh-water habitats. DNA tests to verify their relationship have so far been inconclusive. 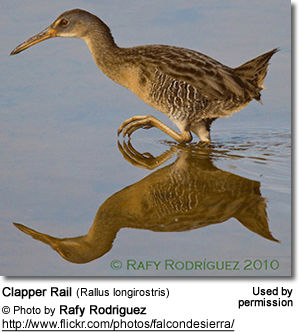 In North America, their range stretches from central California to Texas and along the east coast up to Massachusetts.

From the United States, their range stretches south along the Pacific and Atlantic coasts through Mexico and some Caribbean islands to northwestern Peru and Suriname in South America. 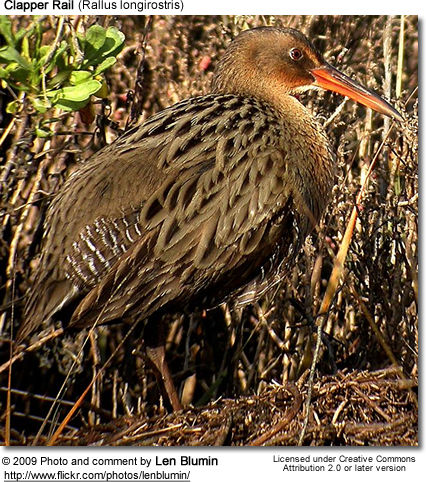 The plumage is grey-brown above and pale-cinnamon below, with brownish-grey cheeks, flanks that are barred with black and white, and a noticeable white patch under the short tail.

The orangey, long bill has a slight down-curved

Young chicks are covered in black down. Juveniles look like adults, but their markings are more indistinct, with more variable amounts of black on the sides 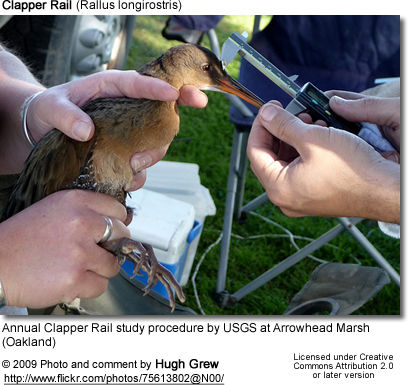 Their diet mostly consist of small fish, aquatic insects, seeds, birds eggs and slugs. Foraging is usually done in shallow water or mud sometimes probing with their long bills. These birds rarely fly, usually seen walking around as they search for food.

Clapper Rail usually place their twig nests low in mangrove roots. The eggs are cream-colored with purplish spots. The average clutch consists of 3 - 7 eggs. The hatchlings are covered in black down and are able to leave the nests within one day. Both parents feed and guard the young until they are independent.

Their calls are described as low grunts.