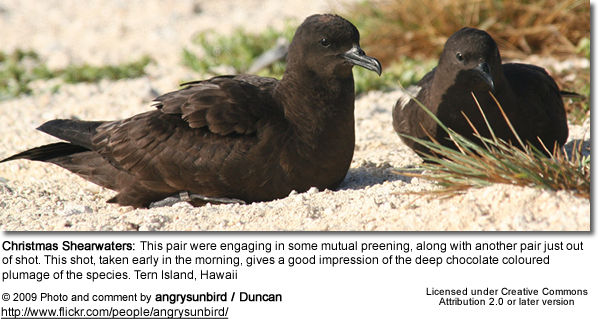 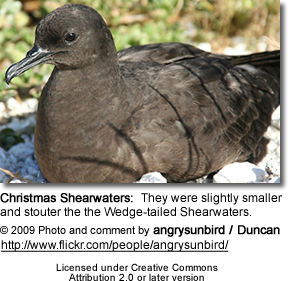 The Christmas Shearwater, Puffinus nativitatis, is a medium sized shearwater of the tropical Central Pacific. It is a poorly known species due to its remote nesting habits, and it has not been extensively studied at sea either. It is one member of a very ancient lineage of the small Puffinus species, the other being, as indicated by mtDNA cytochrome b sequence data, the Galápagos Shearwater which until recently was considered conspecific with Audubon's Shearwater (Austin et al., 2004).

The Christmas Shearwater has all over dark brown plumage, which is slightly paler on the underside of the bird and some small edging of white under the chin. Both sexes are alike, as are the young after fledging.

It is a slender bodied shearwater, about 36 cm long, with a wingspan of around 75 cm and weighs around 350 g.

The species closely resembles the Sooty Shearwater and Short-tailed Shearwater, but has dark brown underwings, and is smaller. It has a short tail and brown-grey feet. 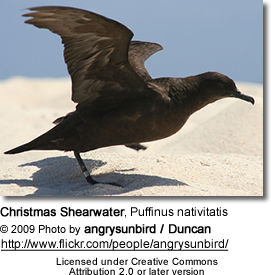 The Christmas Shearwater nests on remote islands of the Central Pacific; the Northwestern Hawaiian Islands, Tuamotu, the Marshall Islands, Kiritimati (for which the species is named) and Sala-y-Gómez. It has become locally extinct on a number of islands, including Wake Island. Outside of the breeding season it ranges across the Pacific, having been recorded off the coast of Mexico and Guatemala in the east, and Bonin Islands in the west.

The Christmas Shearwater nests on sandy islands with good cover. It nests on the surface, underneath dense cover (such as the naupaka), or under rock outcroppings. It lays one white egg, the timing of laying varying from island to island, on some islands breeding throughout the year. The egg is incubated for around 50 days. The time taken to fledge varies depending on the season, ranging from 60 to 100 days.

The Christmas Shearwater feeds at sea, predominantly on squid, and fish, mostly goatfish and flying fish. It is highly pelagic (over sea) and is dependent on predatory fish such as tuna driving prey species to the surface. 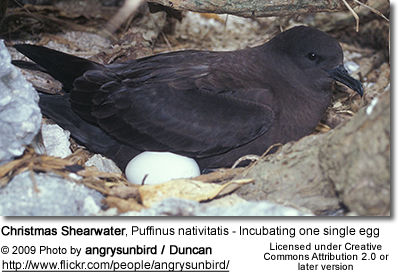 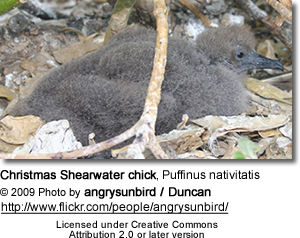 Although few specific studies have been conducted on the Christmas Shearwaters, petrels and shearwaters are threatened worldwide by fishing, ingestion of plastic waste, and habitat degradation. For example on Laysan Island the introduced rabbits degraded the scrub cover, leaving adults, chicks and eggs vulnerable to overheating, and introduced black rats took eggs and chicks. 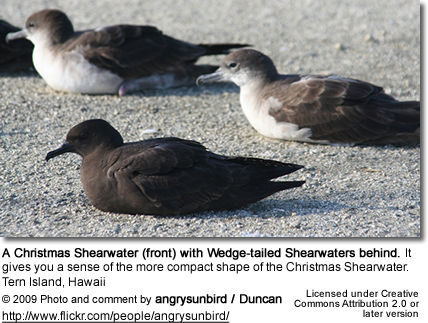