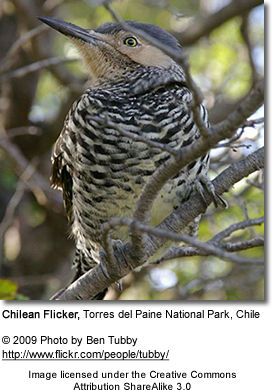 The Chilean Flicker (Colaptes pitius) is a member of the Picidae family, and is the most common woodpecker species in Chile. It is easily identified by its unusual markings and its calls. The barred pattern of the feathers is distinctive, as is its call: "pitio-pitio-pitio." The birds are usually seen in pairs, and during breeding season, they will form family groups. It is classified as Least Concern on the IUCN.

During the decade of the 1830’s, Charles Darwin, on his voyage to South America aboard “The Beagle,” stopped in Chile long enough to observe much of the wildlife there. Two birds in particular, The Chilean Flickerand the Campo Flicker surprised the scientist and naturalist. These were species whose behavior was, in some ways, quite unusual. He observed that the Chilean and Campo utilized a different foraging strategy from other woodpeckers—they nested and foraged on the ground in open areas rather than in trees within woodlands.

The Chilean Flicker is distributed in central and southern Chile and adjacent areas of extreme western Argentina. It is restricted to the temperate forests and Mediterranean zone of Chile and Argentina.

Its natural habitats are temperate forests, subtropical or tropical high-altitude shrubland, and heavily degraded former forest. It dwells in open southern beech Nothofagus forest and in agricultural areas with nearby trees. (Nothofagus refers to the southern beech trees.)

The Chilean Flicker can be found from the coast to the foothills of the Andes up to elevations of 2,000 meters above sea level. It avoids living inside the forest; instead, it remains on the edges of the forest as well as near shrubs and bushes in open fields and dry, stony hills.

It will frequent any wooded areas, even if the trees are not native to the region. A common species, the Chilean is often seen near towns and villages. Capable of flourishing in a wide variety of landscapes, the Chilean inhabits areas ranging from the very dry, xeric forest (xeric biomes require very little moisture) and edge of Matorral shrubland to extremely wet, temperate rainforest, and all other climates that fall between those extremes. It prefers mature and old-growth forests to second-growth woodlands, particularly if those are on the edge of the forest or in open areas within the forest.

Birds in S Argentina named as race cachinnans on basis of proportionately shorter tail, but differences are insignificant. Monotypic.

When the Chilean takes flight, flashes of yellow from the underwings can be seen, and the white feathers on its rump are visible as well. The upperparts are dark brown, and some of the feathers are light brown tinged with yellowish-white colorations; this gives the impression of an irregular network of wavy bars. In contrast, the neck, breast and underparts are whitish-grey or buffy-white with black-brown barring. There is also a tawny area that extends from the base of the bill up and around the cheeks.

The male sports a distinctively marked mustachioed area which is lacking in the female. The forehead to nape area is a buff-grey, and he has a dusky malar region which is absent in the female.

The Chilean Flicker’s plumage has been compared to the Fernandina’s Flicker’s, a bird in Cuba. These two species are the only flickers in which the males lack red in their plumage. The Chilean differs from the Fernandina’s in that it displays a dark crown and dense barring on the breast. The Chilean’s feathers are unusual for a flicker since it displays a mostly barred pattern. Another distinction is the Chilean’s bright yellowish-white eyes.

The Chilean Flicker is a ground forager, hunting for insects and their larvae among the shrubbery. Like other flickers, he captures his prey by using his strong, short bill to pierce wood; he then extracts insect larvae with his strong tongue. When he is not feeding, he will spend his time high in the trees.

Unlike most woodpeckers, this species rarely constructs its nest in cavities within tree trunks; instead, the Chilean Flicker excavates nesting holes in cliffs, steep slopes and banks. The female will lay 5 or 6 eggs in the nest cavity. Very little is known about the breeding habits of this species.

Its characteristic call is “pitio, piteo, piteo,” or “Pitiu, pitiu, pitiu.” This call has given the Chilean Flicker its scientific name. The flight call differs from that call in that it consists of a sequence of rapid trills.