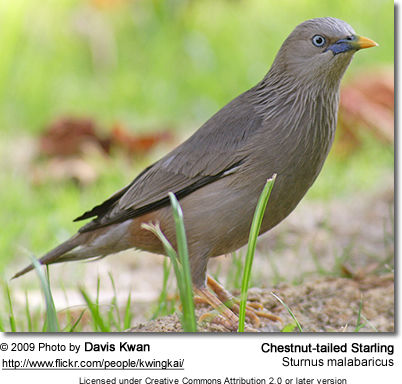 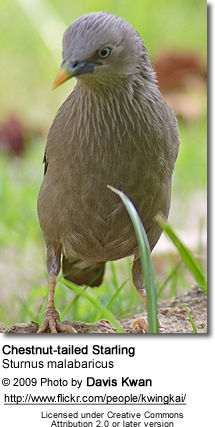 The Chestnut-tailed Starling or Grey-headed Myna, Sturnus malabaricus, is a member of the starling family of birds. It is a resident or partially migratory species found in wooded habitats in India and Southeast Asia. The population in the Western Ghats has a white head and this taxon(T. (m.) blythii) is sometimes considered a full species. This passerine is typically found in open woodland and cultivation.

They fly in tight flocks and often rapidly change directions with great synchrony.

There are three subspecies of the Chestnut-tailed Starling:

Both the nominate subspecies and nemoricola are known to perform some poorly understood movements (e.g. S. m. malabarica has been recorded from Pakistan and in central and southern India).

The taxon blythii is sometimes (e.g. Rasmussen and Anderton, 2005) considered a valid species, the Malabar White-headed Starling or White-headed Myna (Sturnia blythii), instead of a subspecies of Sturnia malabarica. As S. m. malabarica only visits the range of blythii during the non-breeding period (winter), the two are not known to interbreed. However a molecular study found the genetic divergence between S. malabarica blythii not signifincatly greater (between 0.2% and 0.8%) than between the sisters S. malabarica malabarica of northern India and S. malabarica nemoricola of Burma and Vietnam and suggested that they are best treated as a single species.

The adults have a total length of approximately 20 cm (8 in).

They have grey upperparts and blackish remiges, but the colour of the remaining plumage depend on the subspecies. In the nominate subspecies and blythii, the underparts (incl. undertail) are rufous, but in nemoricola the underparts are whitish tinged rufous (especially on flanks and crissum).

The nominate and nemoricola have a light grey head with whitish streaking (especially on crown and collar region). In blythii, the head and chest are white.

All subspecies have white irides and a yellow bill with a pale blue base.

Males and females look alike, but juveniles have whitish underparts and just chestnut tips to the tail feathers. 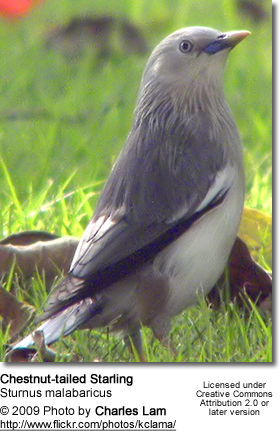 Like most starlings, the Chestnut-tailed Starling is fairly omnivorous, eating fruit, nectar and insects.