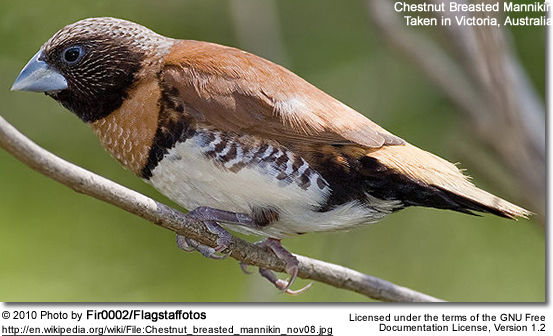 The species is found in Australia, New Caledonia, Indonesia, and Papua New Guinea. This species is also introduced to French Polynesia and France.

The Chestnut-breasted Munia has a total of six subspecies and seven forms. The subspecies are as followed:

L. castaneothora occurs in Tahiti. Apparently, it is descended from L. c. castaneothorax. They are distinguished today by having paler underparts and by the scalloping of the nape extended onto the mantle. 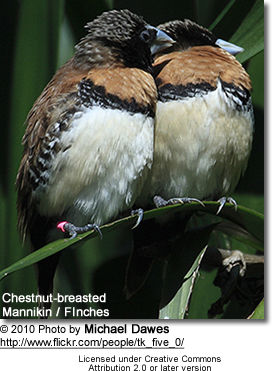 In Australia, the Chestnut-breasted Munia is known as a bird of reed beds and rank grasses bordering rivers, in swamp, in grassy country, and mangroves. It is commonly found in cane fields and cereal crops. In dry seasons, it is seen in arid country but always near water. It is also found in grassy woodland. (Slater et al. 1986)

"I had not the good fourtune to meet with this bird in a state of nature, but I have been informed that it frequents reed beds bordering the banks of rivers and lagoons on the eastern coast, and that it much resembles the Bearded Tit Panurus biarmicus, of Europe in the alertness with which it passes up and down the upright stems of reeds, from the lower part to the very top, a habit for which the lengthened and curved form of its claws seem well adapted."

In New Guinea, the Chestnut-breasted Munia is a bird of drier areas and does not usually seen in jungle roads and clearings where other munias such as Grey-headed Mannikin are found.

In French Polynesia, it is well established as an introduced species, and its habits have developed somewhaat differently, indicating the adaptability of the species. It is widespread on the bracken-covered hill slopes, in pastures and gardens (it is not a garden bird in Australia), on cultivated land and wasteland, in forest ecotones and coconut plantations (Lever 1989) 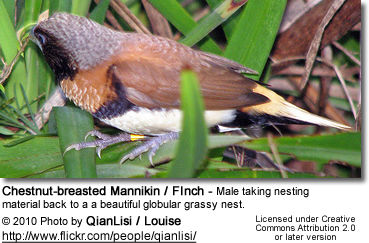 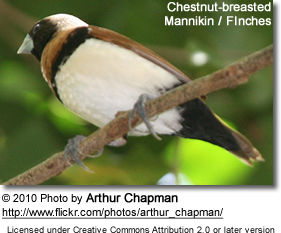 In Australia, during the breeding season Chestnut-breasted Muniais mostly seen in pairs, but in late autumn and winter months it congregates in large flocks, at times eating seeds of cereal crops.

Chestnut-breasted Munia is a highly sociable species, flocking in large number outside the breeding season. Breeding birds will join groups or flocks when foraging.

It has a distinct liking for Barley seed and thus the local people give it a name, Barley Bird. (Cayley 1932) The species is also fond of paspalum grass Paspalum longifolium, bullrush millet Pennisetum typhoides and Sorghum species. It is also been recorded that it feeds on feral millet Pannicum maximum and wild sugar cane Saccharum robustum in Papua New Guinea. (Bapista 1990)

Copyright: Wikipedia. Parts of the above article is licensed under the GNU Free Documentation License. It uses material from ... Additional information and photos by Avianweb.

For further information, please refer to the finch websites listed under the heading or, for more general information, the below web resources are helpful: