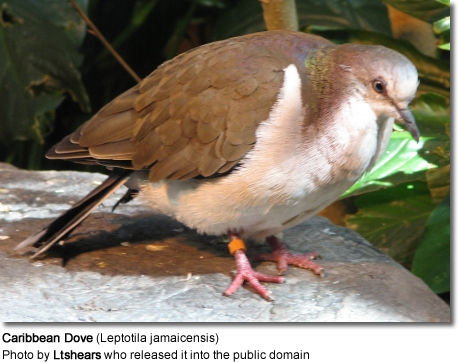 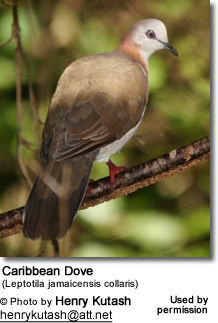 The locally common and resident (non-migratory) Caribbean Doves inhabit the Bahamas, Yucatán Peninsula and several adjacent Mexican offshore islands (including Cozumel) and the countries of Belize and Honduras (Bay Islands), and the Colombian island of San Andrés off the Nicaraguan coast.

Populations also occur on the Caribbean islands of Caymans, Jamaica, and Turks and Caicos.

They are usually found on the ground in semi-arid, lowland forests up to elevations of 6,560 feet (2,000 meters). They are also common in gardens, especially with bird feeders, and orchards, where they feed on fruits.

They are easily identified in the Caribbean region by their conspicuous iridescent purple, rosy to bronze-green feathers on the neck sides and the nape.

The back and wings are largely olive-brown with a grey crown and the chest is pale greyish / rosy, turning white on the abdomen and undertail feathers. The forehead, face and throat are whitish turning blue-grey on the crown and back of the neck,

The irises are yellowish, often with a red ring around them. The eyes are surrounded with dull dark reddish-purple skin.

The bill is blackish, slightly greyer at the base. The legs and feet are red.

Females look similar to the males; but have a duller iridescence on the back of the neck.

Immature birds have a duller plumage and lack the iridescence of the adults. Their wing-coverts (feathers) and the feathers on the shoulder are typically edged with red, and there are pale reddish-brown bars on the neck and chest.

Caribbean Doves feed on seeds, small fruits, insects, larvae and small snails. They readily take advantage of bird feeders in gardens or forage alone, in pairs or small family groups on the forest floor, but will also remove fruits and nuts from trees or shrubs.

Foraging is usually done on the ground among the leaf litter or along the edges of woodland.

Most breeding occurs between March and May. Pairs are monogamous. Males seeking to attract females perform courtship displays during which they tilt the head and expand the feathers of the neck and chest while they softly call out to the females.

The nests are fairly large and generally consist of fragile platforms of fine twigs, lined with rootlets placed in a dense low tree or shrub - usually no more than 10 feet (3 meters) above the ground. Although, on occasion, they have nested on the ground.

The average clutch consists of 2 white eggs that are incubated for about 14 days.