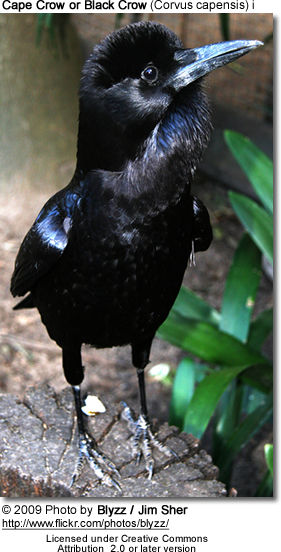 The Cape Crow or Black Crow (Corvus capensis) is slightly larger (48-50 cm in length) than the Carrion Crow and is completely black with a slight gloss of purple in the feathers.

It has proportionately longer legs, wings and tail too and has a much longer, slimmer bill that seems to be designed for probing into the ground for invertebrates (= animals without internal skeleton, such as insects, larvae, earthworms, millipedes, snails, spiders). The head feathers have a coppery-purple gloss and the throat feathers are quite long and fluffed out in some calls and displays.

This species occurs in two large separate regions of the African continent.

One form ranges from the Cape at the southern tip of Africa up to southern Angola and across to the east coast of Mozambique. The other population occurs in a large area from Sudan, Ethiopia,Tanzania and Kenya in central east Africa. The more northern population is on average slightly smaller than the southern. 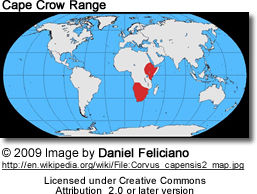 As far as feeding is concerned, it eats grain and other seeds, invertebrates which it digs for with powerful downward stabs of its long bill. It opens Maize before they are fully ripe, bulbs and fleshy roots of certain plants, frogs and small reptiles, fruits and berries.

It takes the eggs and chicks of ground nesting birds and has been known to kill birds of up to a pound in weight (especially domestic poultry). It turns over the droppings of mammals for insects.

Nesting is always in trees, usually near the top. It has been known to nest in shrubs but much less frequently. There are usually 3-4 eggs incubated over 18-19 days and fledged by around 38 days. Usually only 3 nestling's ever surviving. 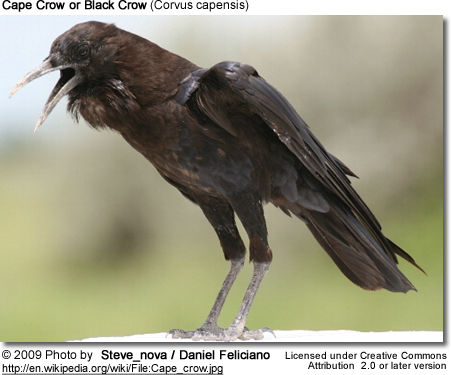 The voice is describes as a "krrah.....krrah.....krrah" or a quicker "kah-kah-kah". It also make very loud, liquid bubbling sounds that carry quite a distance and also gives throaty chuckles. There is evidence that vocal mimicry is practiced too.