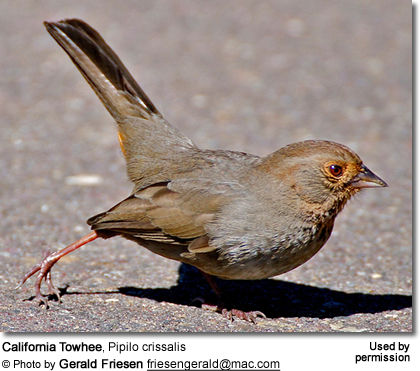 The California Towhee, Pipilo crissalis, is a bird of the family Emberizidae, native to the coastal regions of western Oregon and California in the United States and Baja California Sur in Mexico.

The taxonomy of this species has been debated. At the higher level, some authors place the towhees in the family Fringillidae. Within the group, there has been debate about whether the distinction between this species and the similar Canyon Towhee, Pipilo fuscus, should be at the specific or subspecific level. The two populations are quite isolated from each other, and molecular genetics seems to have settled the matter in favour of two distinct species for the present. On the other hand there seems to be little distinction between the northern and Baja Californian populations within P. crissalis.

The California Towhee's coloring is dull brown overall with light rust undertail coverts and buff or rust colored streaks at the throat. There is little sexual dimorphism. It is around 20-25cm in length, and has a noticeably long tail. Its appearance suggests a large, plain sparrow.

This bird's natural habitat is brush or chaparral, but it adapts well to urban parks and gardens. However its skulking habits combined with its nondescript appearance mean that it is not one of the better known garden birds even though it is regularly drawn to feeding stations.

Nests are typically found in low branches or shrubs about .5 to nearly 4 meters (2 to 12 feet) above ground. The nest is a bulky cup made of twigs, stems, grasses, and hair. 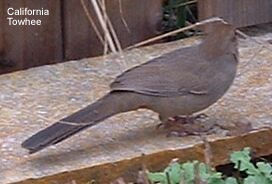 The California Towhee feeds on the ground or in low scrub where it prefers a variety of seeds and some insects. It is most often seen traveling or feeding singly or in pairs with mixed flocks.

The call is a metallic sounding chink and the song consists of a long repeating series ended with a trill.

The female incubates the nest of 2 to 4 eggs alone for 11 days. Eggs are laid from March through September with shells that are slightly glossy and pale bluish white with some brownish flecks concentrated mostly on the larger end. Young leave the nest after 8 days.