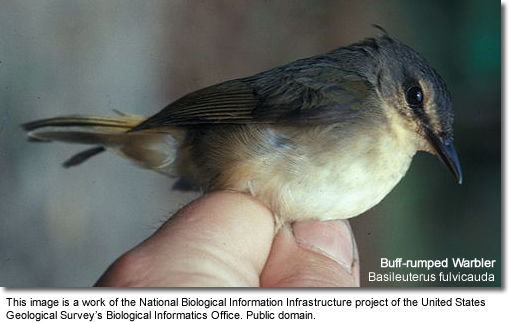 The Buff-rumped Warbler (Basileuterus fulvicauda) is found in Honduras south to northwestern Peru and western Amazonian Brazil in South America, where it occurs in in forests at up to 1500 m altitude, always near water. It is a common species within its range and is often seen hopping on the ground, pumping and swinging its broad tail constantly.

Both the male and the female build a bulky domed nest with a side entrance on a sloping bank next to a stream or path.

The average clutch consists of two white eggs which are incubated for 16-17 days. The young fledge (leave the nest) when they are about 13 - 14 days old.

The Buff-rumped Warbler mostly feeds on insects, spiders and other small invertebrates (= animals without internal skeleton, such as larvae, earthworms, millipedes, snails), taken on the ground or in flight in open areas along the banks of streams, puddles, roadsides or tracks. Pairs aggressively defend their feeding territories along a stretch of stream throughout the year.

Its call is described as a hard tschik - similar to the vocalization of the Northern Waterthrush.

The male's song is a warble followed by a series of 8-15 ringing chew notes; and the female may give a soft reply