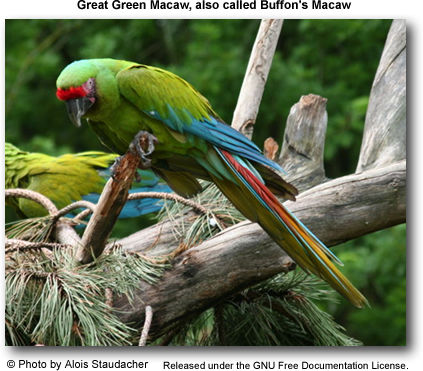 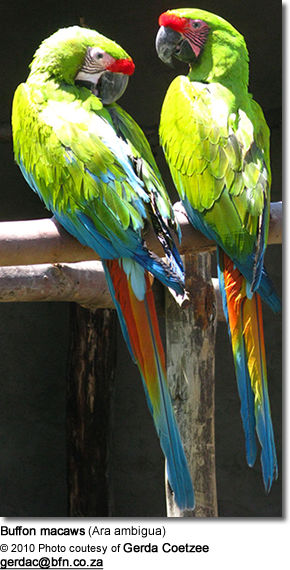 As is suggested by their common name, these large macaws are predominantly green - however, with some very attractive, bright plumage highlights. They were previously treated as subspecies (Ara military ambigua) of the smaller Military Macaws (Ara militaris) based on hybridization of these two species in areas where their ranges overlap and physical similarities. However, these species have now been separated.

This species was previously widespread in Central and northern South America, but deforestation and destruction of their natural habitat has taken their toll on this species.

Considerable declines in their numbers have been noted after large areas of primary forests were wiped out to make room for banana plantations. This species is highly dependent on the Mountain Almond Tree (Dipteryx panamensis) both for nesting as well as a source of food. There are a couple of factors that caused severe declines in the number of these trees. There is a great demand for them in the construction industry since it was discovered that the wood of this tree is very hard (one of the densest in the world) and is resistant to salt water and, unlike other woods, does not rot away when exposed to salt water. The wood was also used to build fancy furniture with. Over 70% (in some areas 90% or more) of their original habitat has been destroyed and these macaws are now treated as globally Endangered.

Captive birds are sometimes seen, but they are very rarely seen as pets, even though they are said to be calmer than many of the better known and more common macaws. Thanks to their mostly green plumage, they have never been sought out as pets and were, therefore, not heavily poached. Unfortunately, this has changed when this species became very rare and endangered and peaked the interests of collectors, who were willing to pay thousands of dollars for one of these birds. Conservation and legal measures have been put into place to protect these gems, but much more needs to be done to ensure their long-term survival.

Their life expectancy is about 60 years.

Buffons Macaws occur naturally in Central America - from Easternmost Honduras south through Nicaragua, Costa Rica and Panama - into South America, where they are found in western Colombia and parts of Ecuador in areas where large tracts of intact forest remain.

In Honduras, these birds are found near the río Plátano; however, they are rare sights.

In Nicaragua, they are found in the Bosawas Reserve and the Indio-Maíz and San Juan Reserve.

In Costa Rica, they were formerly quite common along the Atlantic coast; however, these birds are now limited to the Northern zone, between the San Carlos, San Juan and Sarapigui rivers to the northern foothills of the Central Volcanoes range, where they usually remain below 1970 feet (600 meters).

Status: In 2009, the combined population of Nicaragua and Costa Rica was estimated at 1,530 birds. In Costa Rica, less than 40 breeding pairs are believed to still have survived.

In Panama, they are locally fairly common on the Caribbean slope and in Darién near Cana, Alturas de Nique; Serranía de Majé and south Cerro Hoya in the province of Veraguas on the southern tip of the Azuero Peninsula.

In Colombia, their range stretches from north of the Serranía de Baudó and the West Andes, east to the upper Sinú valley.

In Ecuador, most of them are found in Esmeraldas (Benítez 2002), and only a few of them remain in the Cordillera de Chongón-Colonche, Guayas.

They inhabit humid lowland rainforests and foothill forests at elevations of up 3,280 feet (1,000 meters). These birds usually remain in the canopy of tall trees. However, they may feed in more open areas.

Seasonal movements towards the coasts - in response to availability of fruiting trees - have been recorded. For breeding, they usually move inland. 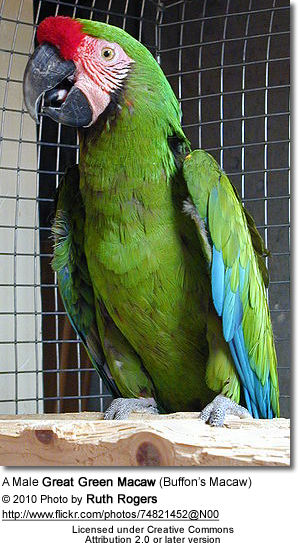 The upper plumage is yellowish green, including the crown (top of the head) and the upperwing coverts (feathers). The forehead and the fine lines on the lores (area between the bill and the eyes) are red. The rump, the vent and the upper tail coverts (feathers) are blue. The flight feathers are darker blue. The throat is tinged with olive/brown. The long, graduated tail is orange-red with pale blue tips; the undertail feathers are olive-green.

The bill is blackish with a pale grey tip. The bare face is pinkish/white with fine lines of olive-brown to reddish feathering. The eyes are pale yellow with pinkish-white eye-rings. The legs and feet are dark grey.

Males and females look alike, except in some females (and older birds) the fine feather lines on the bare face may be more reddish in color.

Immature birds resemble the adults; except they have a more olive-green tinge in their plumage. Their tails are shorter and tipped with yellow. Their eyes are grey.

These large parrots are able to fly long distances at considerable heights. Their flight is described as rapid and direct, with shallow, steady wing beats.

Great Green Macaws feed on various seeds, fruits, hard-shelled nuts and flowers. Their principal food source is the fruit of the Swamp Almond Tree (Dipteryx panamensis). One pair in Ecuador was observed to mostly feed on orchids, which made up about 71% of their diet (Lopez-Lanus 1999). They have large, strong beaks that enable them to crack open even the hardest nuts to retrieve the seeds inside. They usually forage in small family groups.

The breeding season varies by location. Populations occurring in Ecuador generally breed between June and November.

They usually nest in the cavities of dead trees, such as Cuipo Trees (Cavanillesia plantanifolia) or Mountain Almond Trees (Dipteryx panamensis).

The average clutch consists of 2 - 3 white eggs, which are incubated by the female for about 26 days to hatching. Hatchlings are blind, naked and completely dependent on parental care; they weigh about 0.8 oz (23 g)

Buffons Macaws are only recommended for experienced breeders and handlers. They are quieter than other macaws and can be kept with other large macaws when not breeding.

Breeding pairs require large flights that are at least 50 feet (15 meters) long. These parrots are not suited for housing indoors.

Strong, fresh branches of pine or eucalyptus should be provided weekly. They require large nest boxes of the approximate size of a whiskey barrel.

Their diet should include ...

Overhead misters are recommended to maintain the plumage in good condition. For entertainment and beak condition, plenty of fresh wood and / or chewable toys should be available at all times.

Their calls are described as loud, raucous squawks and growling “aowrk” when feeding. They also emit creaking or groaning sounds.