The Brown Violet-ear breeds at middle elevations in the hills from Guatemala south to Bolivia and eastern Brazil, as well as on Trinidad - at elevations from 400 to 1600 m.

Outside the breeding season, the Brown Violet-ear may move into the lowlands.

The Brown Violet-ear is typically found high in the forest canopy, tall second growth and coffee plantations, but it will feed at lower levels at edges and clearings. 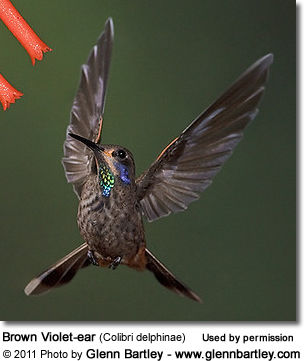 It can easily be identified by the violet patch running back and down from the eye, a hermit-like malar (cheek) stripe, and a glittering green central throat.

The plumage is mostly dull brown, with a rufous rump and greyer underparts. Its beak is short and straight.

The female looks like the male, but has a smaller throat patch.

Young Brown Violet-ears have rufous edges to the upper plumage, and little or no violet behind the eyes.

The female Brown Violet-ear is responsible for building a small cup-shaped nest out of green moss and line it with other soft plant fibers, and strengthen the structure with spider webbing. The nest is typically found on a twig 1-3 m high in bush.

The Brown Violet-ears primarily feed on nectar taken from a variety of brightly colored, scented small flowers of trees, herbs, shrubs and epiphytes. They favor flowers with the highest sugar content (often red-colored and tubular-shaped) and seek out, and aggressively protect, those areas containing flowers with high energy nectar.They use their long, extendible, straw-like tongues to retrieve the nectar while hovering with their tails cocked upward as they are licking at the nectar up to 13 times per second. Sometimes they may be seen hanging on the flower while feeding.