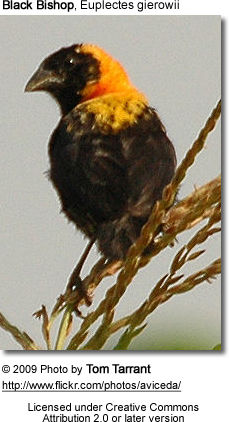 They inhabit grasslands, shrublands and wetlands; where they are typically seen alone or, on occasion, occur in small flocks.

The breeding male has a mostly brown plumage, except for black wings, tail, chest, cheeks and forehead. The neck, back of the head and chest band are orange or orange-red. The under tail feathers are coverts are pale buff with black streaks. The upper back is golden yellow and the rump (lower back) is brown. The bill is black.

The non-breeding male has a mostly brown plumage, except for the black back, wings and rump, a yellowish stripe over each eye and the chin. The sides of the face and chest are tawny buff.

Females have a dark plumage. They have black wing linings, boldly spotted under tail coverts (feathers) and dark spots on the otherwise buff chest.

Juveniles resemble females, except have smaller spots on the chest.

Males are believed to be polygynous (mating with several females). During the breeding season, they aggressively defend breeding territories against other males.