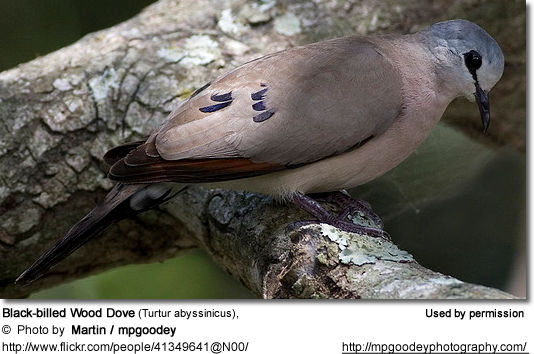 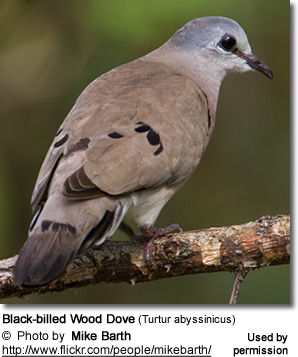 They are closely related to the Emerald-spotted Wood Doves (Turtur abyssinicus) with whom they have formerly been considered conspecific (one and the same species). Their range overlaps in a limited area in Ethiopia, extreme south-east Susan - and on rare occasions in north-west Kenya and north-east Uganda.

The Black-billed Wood Doves occur in the drier parts of tropical Africa, north of the equator.

They are resident (non-migratory) throughout their range, and are commonly found near deserts, scrub and savannah. 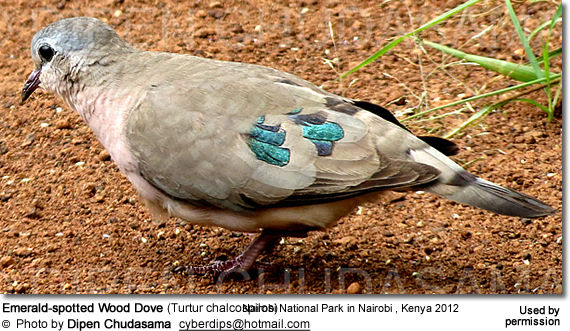 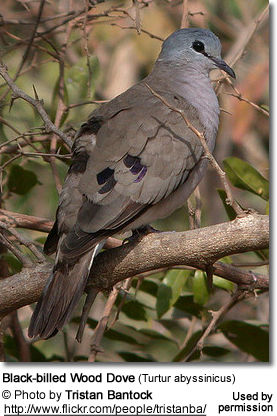 The back, wings and tail are pale grey-brown. There are two dark bands across the lower back and tail. The forehead, crown and nape (back of the neck) are bluish grey, fading to whitish on the face. The folded wings have distinctive dark glossy patches.

The plumage below is a creamy a pinkish cream, turning white on the abdomen.

The legs are purplish and the eyes brown.

Pairs are monogamous, establishing firm bonds that last a lifetime. They build flimsy stick nests in the branches of trees (often acacias) or bushes making sure that the nests are well hidden in dense green foliage. The average clutch consists of two cream-colored eggs. The parents take turn in incubating the eggs for about 13 - 17 days to hatching and the nestlings fledge (leave the nest) about 2 weeks later. Pairs raise their young jointly to independence.