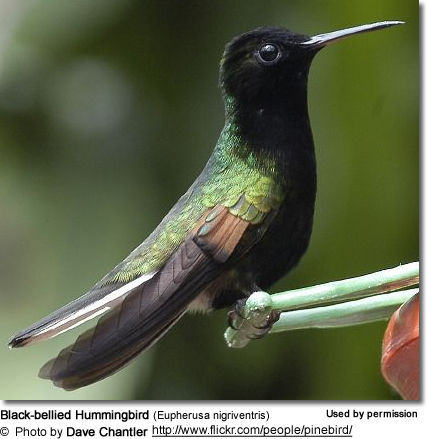 The Black-bellied Hummingbird male has a velvet black face mask, throat and belie, and light-colored under tail feathers. The upper plumage is iridescent golden-green. The bend of his wings are rusty-colored. He has a black, long, slightly curved beak.

The female is green above and pale-colored above. She doesn't have the black markings of the male.

These birds were named for the humming sounds created by the beat of their wings, which make up to 100 beats per second. Their wings move so rapidly that the naked eye cannot detect them. They are the only birds that can generate power on both the forward and backward wing strokes, which makes it possible for them to fly backward. 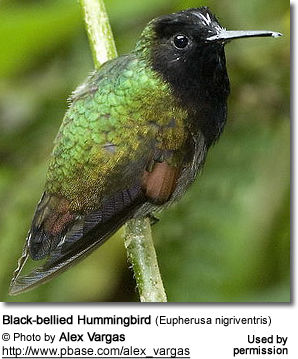 The female Black-bellied Hummingbird is responsible for building the bulky cup-shaped nest out of plant fibers woven together and green moss on the outside for camouflage in a protected location, typically about 2 - 4 m high at the end of a descending bamboo stem or on a rootlet under a bank. She lines the nest with soft plant fibers, animal hair and feather down, and strengthens the structure with spider webbing and other sticky material, giving it an elastic quality to allow it to stretch to double its size as the chicks grow and need more room. The nest is typically found on a low, thin horizontal branch.

The average clutch consists of two white eggs, which are about the size of coffee beans. She incubate the eggs for about 15 to 19 days. The male is not involved in this process. He continues to defend his territory and the flowers he feeds on. The female is the only care taker. She alone protects and feeds the young with regurgitated food (mostly insects since nectar is an insufficient source of protein for the growing chicks). As is the case with other hummingbird species, the chicks are brooded only the first week or two, and left alone even on cooler nights after about 12 days - probably due to the small nest size. The juveniles leave the nest when they are about 20 to 26 days old. 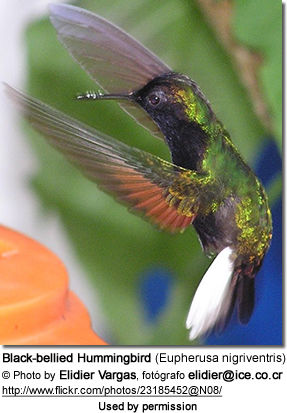 The Black-bellied Hummingbird primarily feed on nectar taken from a variety of brightly colored, scented small flowers of trees, herbs, shrubs and epiphytes. 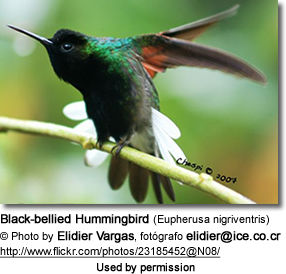 The call is a high-pitched twittering.