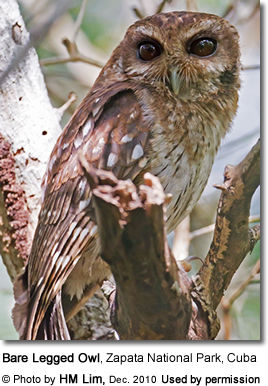 The Bare-legged Owls (Gymnoglaux lawrencii) - also known as Cuban Screech Owls - are endemic to Cuba and the adjacent Isla de la Juventud or "Isle of Youth" (formerly known as the Isle of Pines or Isla de Pinos). They inhabit dry forests, lowland moist forests as well as heavily degraded former forest. Within their range, they are the only small owl present.

The Bare-legged Owls are fairly common over their restricted range and can be found in wood areas, mixed palm forest, tropical dry forest and thickets. They have also adapted well to human modified landscapes

Bare-legged Owls measure about 20 cm in length. They have a creamy facial disk with a broad dark rim, and long white "eyebrows". The plumage is dark brown above with white spots and pale grey below with faint streaks. They were named for their bare legs

Their brown, forward-facing eyes are nearly as large as human eyes and are immobile within their circular bone sockets. For this reason, owls need flexible necks, as they have to turn the entire head to change views. They have the same number of vertebrae in their necks as most mammals and can move their heads 270 degrees in either direction (nearly all the way around!). Most other bird species have their eyes on the sides of their heads enabling them to see sideways and, to some extent, backwards. Owls, on the other hand, have both eyes in the front which enhances their depth perception.

Bare-legged Owls generally nest in tree cavities, sometimes those excavated by Woodpeckers. Records also exist of them nesting in the crevice on cliffs. They typically reuse nests several years in a row. The average clutch consists of 2 eggs.

They mostly feed on large insects and to a lesser extent on frogs and snakes.