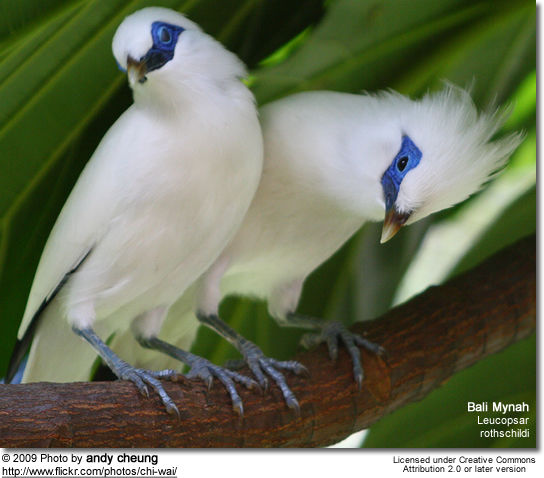 The Bali Starling, Leucopsar rothschildi, also known as Rothschild’s Mynah, Bali Myna or Bali Mynah is a medium-sized (up to 25cm long), stocky myna, almost wholly white with a long, drooping crest, and black tips on the wings and tail. The bird has blue bare skin around the eyes, greyish legs and a yellow bill. Males and females look alike.

Placed in the monotypic (one single species) genus Leucopsar, it appears to be most closely related to Sturnia and the Brahminy Starling which is currently placed in Sturnus but will probably soon be split therefrom as Sturnus as presently delimited is highly paraphyletic (= some, but not all, of the descendants from a common ancestor) (Jønsson and Fjeldså 2006).

The specific name commemorates the British ornithologist Lord Rothschild, who described the bird in 1912.

The Bali Starling is distributed and endemic to the island of Bali in Indonesia, where it is the island's only surviving endemic vertebrate species.

This rare bird was discovered in 1910. Bali's other endemic, the Bali Tiger, was declared extinct in 1937. In 1991, the Bali Starling was designated the fauna symbol of Bali; its local name is jalak bali .

In its natural habitat however it is far less conspicuous, using tree tops for cover and - unlike other starlings - usually coming only to the ground to drink; this would seem to be an adaptation to the fact that it is instantly noticeable to predators when out in the open. 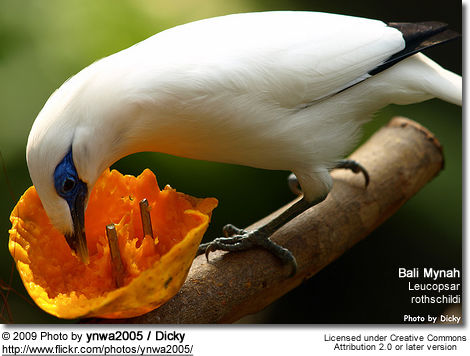 The Bali Starling is critically endangered, hovering immediately above extinction in the wild for several years now (BirdLife International 2006). The last stronghold of the species is at Bali Barat National Park; about 1,000 individuals are believed to be held in captivity legally. In fact, the Bali Starling is so much in danger that that national park has been set up just for the Bali Starling's survival. The wild population was at an all-time low of just 6 birds in 2001, after the late-1990s wild population of 3-4 dozen was reduced by poachers for the illegal pet trade.

Its decline towards extinction has been caused by the urbanization of the island and by illegal trapping for the caged-bird trade; indeed, the number of captive birds bought on black market is estimated to be twice the number of legally-acquired individuals in the captive breeding program. The Bali Starling is listed in Appendix I of CITES. Trade even in captive-bred specimens is strictly regulated and the species is not generally available legally to private individuals. However, experienced aviculturalists may become affiliated with the captive-breeding program, allowing them to legally keep this species.

Copyright: Wikipedia. This article is licensed under the GNU Free Documentation License. It uses material from ... Photos added by Avianweb.

BeautyOfBirds strives to maintain accurate and up-to-date information; however, mistakes do happen. If you would like to correct or update any of the information, please send us a message (with a link to the page the correction is to be made). THANK YOU!