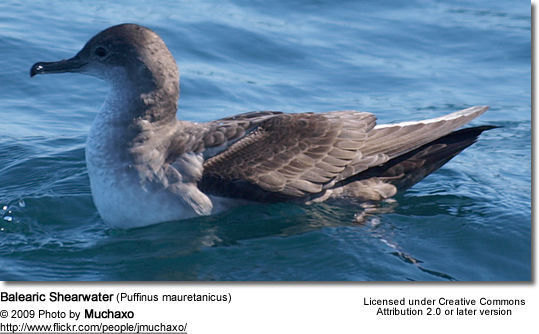 The Balearic Shearwater (Puffinus mauretanicus) is a medium-sized shearwater in the seabird family Procellariidae. It was long regarded a subspecies of the Manx Shearwater; see there for more on the Puffinus puffinus superspecies; following an initial split it was held to be a subspecies of the "Mediterranean Shearwater" (Sibley and Monroe 1990) for nearly ten more years, until it was resolved to be a distinct species, separate from the Yelkouan Shearwater (Wink et al. 1993, Heidrich et al. 1998, Sangster et al. 2002). It is the last taxon of the puffinus complex that was recognized as a separate entity.

It appears to belong to a group of Mediterranean and adjacent Atlantic species which includes the Yelkouan Shearwater (Austin 1996) and one to three prehistorically extinct taxa, Hole's and possibly also Olson's Shearwater and an undescribed form of unclear distinctness from Menorca (Alcover 2001). Hole's Shearwater may be the closest known relative of P. mauretanicus. The two living Mediterranean lineages had probably separated before the end of the Pliocene (c.2 mya), as indicated by molecular differences and the Ibizan fossil Puffinus nestori from the Late Pliocene or Early Pleistocene, which may have been the direct ancestor of the present species (Heidrich et al. 1998).

This species breeds on islands and coastal cliffs in the Balearic islands. Most winter in that sea, but some enter the Atlantic in late summer, reaching north to Great Britain and Ireland.

This species nests in burrows which are visited only at night to avoid predation by large gulls.

It has the typically "shearing" flight of the genus, dipping from side to side on stiff wings with few wingbeats, the wingtips almost touching the water. This bird looks like a flying cross, with its wing held at right angles to the body, and it changes from dark brown to dirty white as the dark upperparts and paler undersides are alternately exposed as it travels low over the sea.

Similar Species: Apart from the less contrasted plumage, this species is very similar to the Atlantic Manx Shearwater and the Yelkouan Shearwater found elsewhere in the Mediterranean. There exists at least one mixed breeding colony of Balearic and Yelkouan Shearwaters, on Minorca, and the species' winter ranges overlap in the Central Mediterranean; for scientific purposes at least, a combination of morphological characteristics and DNA sequence data is suggested to be required for identification of such birds to species (Genovart et al. 2005).

Behavior: This is a gregarious species, which can been seen in large numbers from boats or headlands, especially on in autumn. 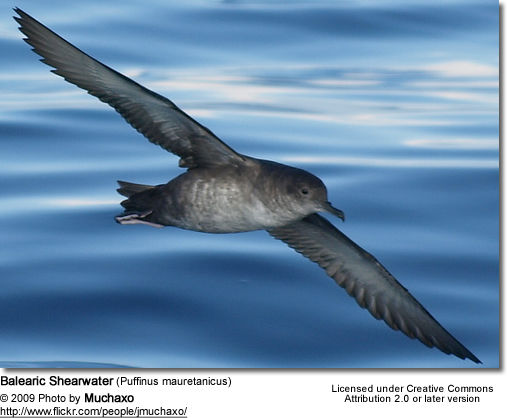 It is under severe threat from the development of holiday resorts near its breeding sites, and also from animals such as cats and rats. The discovery of Yelkouan Shearwaters in the Minorcan colony suggests that hybridization may also pose a problem (Genovart et al. 2005); the Balearic Shearwater is considered Critically Endangered with extinction by the IUCN.

It is silent at sea, but at night the breeding colonies are alive with raucous cackling calls, higher pitched than the Manx Shearwater's.

The Balearic Shearwater feeds on fish and mollusks. It does not follow boats.

BeautyOfBirds strives to maintain accurate and up-to-date information; however, mistakes do happen. If you would like to correct or update any of the information, please send us a message via the comment form below. THANK YOU!