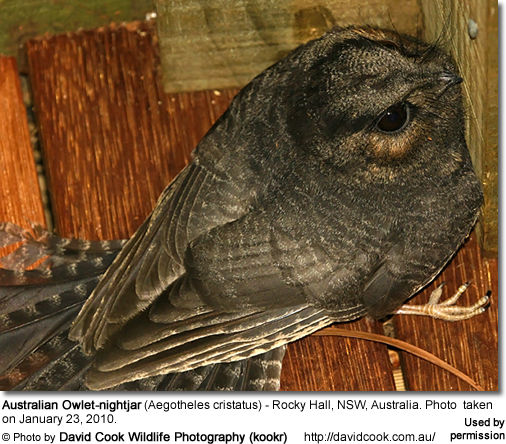 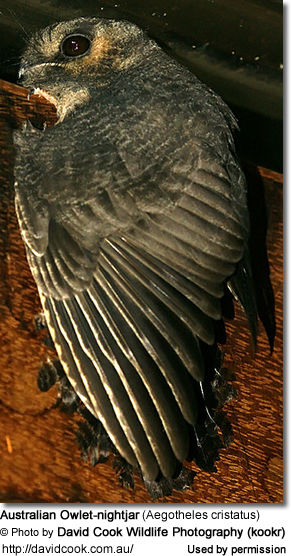 These birds have the appearance of small owls with big eyes, but they are more closely related to the nightjars and frogmouths.

The Australian Owlet-nightjars occur naturally throughout Australia, the island of Tasmania to the south and southeastern New Guinea to the north of Australia.

They are usually found in areas with trees and suitable hollows, such as hollow branches or tree trunks, which they use for roosting during the day and nesting.

These secretive night hunters are difficult to spot, as they usually remain hidden in their roosting cavities during the daytime. 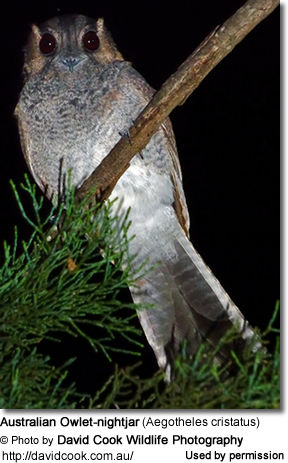 The Australian Owlet-nightjar is the smallest of all night birds found in Australia. Within the owlet-nightjar family, they are amongst the small to medium-sized species. They measure between 8.3 and 9.9 inches (21 and 25 cm) in length (including the tail).

Two different color morphs, and an intermediate form, have been identified in the Australian Owlet-Nightjar.

In all forms, the plumage below is paler and faintly barred with black. Two wide black stripes extend from the top of the eyes over the head and meeting on the back.

Males and females look alike, the exception being the rufous-morph female.

Their wings are pointed and short. The tail is long and rounded. The bill is tiny but opens up wide; and is surrounded by "whiskers". The large brown eyes are non-reflective when exposed to a light, differentiating them from other noctural birds whose eyes give a red reflection.

In accordance with their nocturnal habits, Australian Owlet-Nightjars mostly feed at night. Most of the time, they will dive from low perches and capture insects (such as grasshoppers, beetles and ants) from the air, ground or take them off leaves, branches or trunks.

Australian Owlet-Nightjars form permanent pair bonds. Pairs usually raise one brood per season; and both parents share the responsibility of constructing the nest and raising the young.

Their nests are usually placed in suitable tree cavities or rock crevices. They may also take advantage of cavities of banks or man-made structures, including buildings. The nests are usually lined with green leaves. It has been reported that they often add eucalyptus leaves and this may be because of their known insecticidal benefits.

Clutches consists of one up to 5 (mostly 3 - 4), slightly glossy, thick-shelled, white eggs. The female either does all or most of the incubation, which lasts 25 - 27 days. The hatchlings are covered with white down that is later replaced by grey down just before the feathers grow in. Both parents protect and feed the chicks, which fledge (leave the nest) when they are 21 - 32 days old.

The young remain close to their parents for several months after fledging.