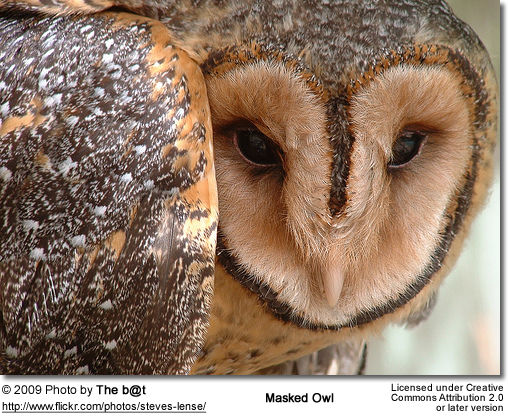 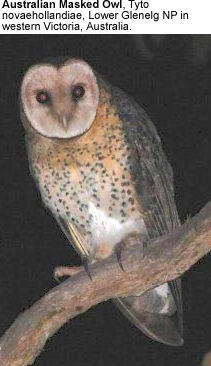 The Australian Masked Owls (Tyto novaehollandiae) are resident (non-migratory) barn owls found in Southern New Guinea and the non-desert areas of Australia. They are also commonly referred to as "Mouse Owls" - as a large portion of their diet consists of mice.

They are one of Australia's largest owls, second only to the Powerful Owls.

Their preferred habitats are shrubs and bush lands waterways with timber. In Australia, they are rarely found more than 300 km inland.

During the day, these nocturnal birds typically roost in large tree cavities near foraging areas.

The Australian Masked Owls measure about 35 - 47 cm in length and weigh about 660 g. Females are generally larger than males.

The plumage is blackish brown with grey and white spots on the upper body, and paler underparts with brown spots. The facial disk is white bordered by short brown feathers forming a heart-shaped outline. The female is generally darker than the male.

Their dark brown or black-colored, forward-facing eyes are nearly as large as human eyes and are immobile within their circular bone sockets. For this reason, owls need flexible necks, as they have to turn the entire head to change views. They have the same number of vertebrae in their necks as most mammals and can move their heads 270 degrees in either direction (nearly all the way around!). Most other bird species have their eyes on the sides of their heads enabling them to see sideways and, to some extent, backwards. Owls, on the other hand, have both eyes in the front which enhances their depth perception. 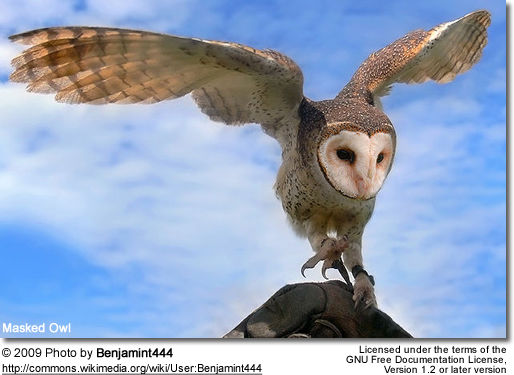 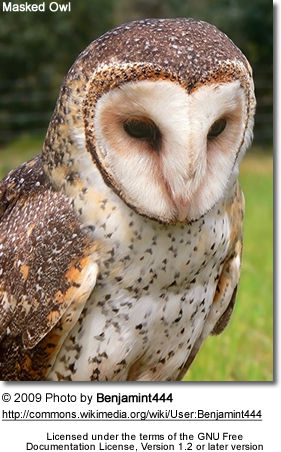 They breed throughout the year. Their nests are typically placed in hollow trees with soil, mulch or sand.

The average clutch consists of 2 - 3 eggs, which are incubated by the females alone, while the males provide food to the nesting females.

The hatchlings are naked and their first feathers are white or off white. They usually leave the nest when they are about two to three months old, but are still fed by their parents for another month before they are independent.