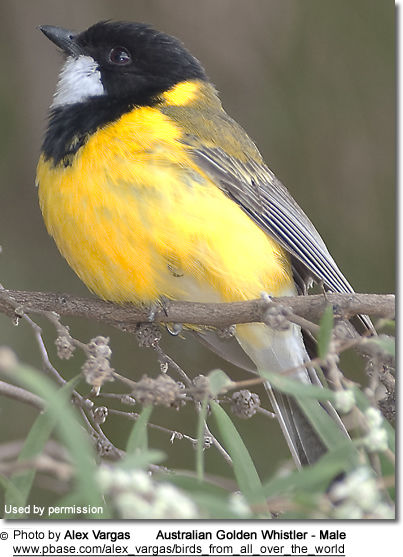 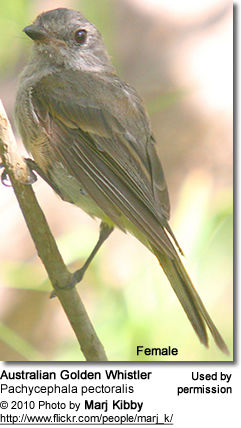 The Australian Golden Whistler (Pachycephala pectoralis) is endemic to Australia, where it is found in fforests, woodland, mallee, mangrove and scrub in (except Australia's interior and most of the north); as well as the mountain fforests in the Snow Mountains in the Papua Province of Indonesia.

They are mostly resident, although some south-eastern populations migrate north during the winter.

The male is bright yellow below and on the nape (lower neck on the back). The wings and back are olive-green. It has a black head and band across the chest. Its throat is white.

A notable exception is the Norfolk Island Golden Whistler (Pachycephala pectoralis xanthoprocta) where the male has the same plumage as the female.

Females are mostly a dull brownish-grey - although some of them have yellowish undertail coverts (vent).

Both males and females have red-brown eyes, a black bill and dark legs.,

The plumage of immature Golden Whistlers are rufous-colored. As they mature, they look similar to the female apart of the rufous edges to some wing feathers. 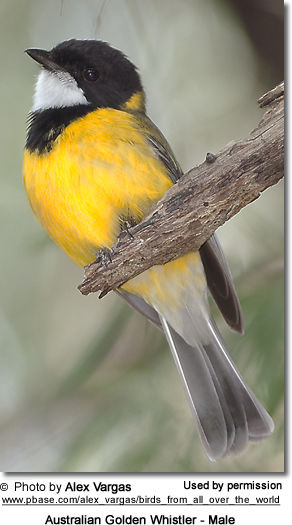 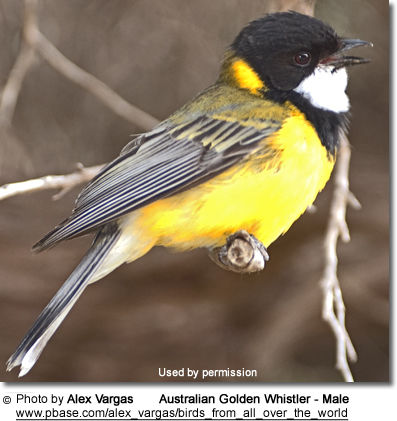 The Australian Golden Whistler is common to fairly common and is therefore not considered threatened.

However, the populations of the Norfolk Island Golden Whistler (P. p. xanthoprocta) have declined for several years now due to habitat destruction and probably also due to introduced predators, such as rats. They are now mostly restricted to the Norfolk Island National Park.

Also the Lord Howe Golden Whistler (P. p. contempta) remains common, but was listed as vulnerable at one time due to its small range; however, it has been taken off the list in recent history.

The Golden Whistlers feed on berries, insects and spiders. They usually forage alone, but occur in mixed-feeding flocks at favored feeding sites.

The Golden Whistlers breed between September and January. Both parents construct the shallow cup nest using twigs, grass and bark - bound together with spider web.

They usually only raise one breed a reason. Both parents take turn in incubating the eggs, which hatch after 15 days. The young fledge when they are about 12 days old. 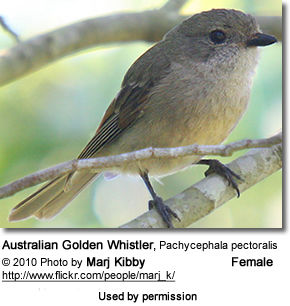 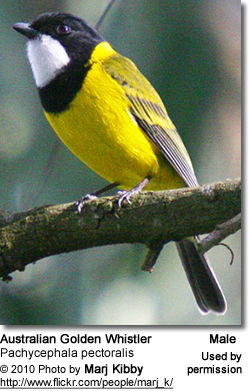 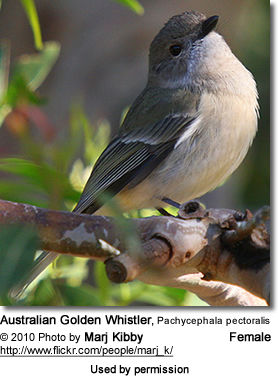 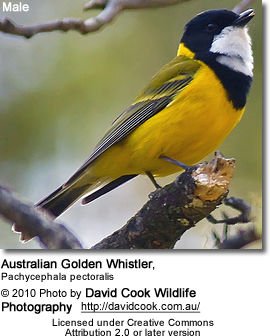