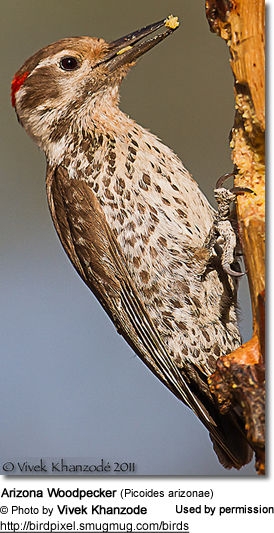 The Arizona Woodpecker (Picoides arizonae) is restricted to southeastern Arizona and southwestern New Mexico in the United States.

This is the only solid brown-backed woodpecker in the United States.

Originally considered a subspecies of the Strickland’s Woodpecker, the Arizona Woodpecker (Picoides arizonae) is now its own species.

In the United States, it inhabits the mountains of extreme southwestern New Mexico and southeastern Arizona. Its range extends southward into Mexico through the Sierra Madre Occidental areas of Sonora, Chihuahua, Sinaloa, Durango, Nayarit, Jalisco, Colima, Zacatecas, and Michoaca. Very few of these species dwell within the U.S; most are in Mexico.

The Arizona Woodpecker in generally a permanent resident in its territory.

Arizona Woodpeckers prefer to live in montane oak or evergreen, pine-oak forests and nearby woodlands close to waterways. They rely heavily on the sycamore tree, and its seedlings will only germinate in high water tables near streams and rivers. Due to rural development and logging, much of their habitat is being destroyed. The resulting overdraft of groundwater and heavy grazing may be taking their toll on the population numbers of Arizona Woodpeckers. Due to the lack of research into the habits of this species, threats to their population dynamics are not well understood.

This species competes with the Hairy Woodpecker and Ladder-backed Woodpecker; these species nest in higher and lower elevations, respectively, so the Arizona has chosen the mid-elevation range, which is quite narrow. They are generally found between 4,900-5,500 feet (1,500-1,700 meters), but range from 4,000-7,000 feet (1,220-2,130 meters).They tend to choose cavities in riparian Arizona walnuts or sycamores, since the wood of these trees is softer and thus easier to excavate than oaks. When food supplies are scarce, a limited number of the southeastern Arizona population migrates south in the winter to oak woodlands or the mouths of canyons.

Because of the small number of Arizona Woodpeckers living in the U.S., they are of moderate importance in conservation. In southeastern Arizona, as well as throughout its relatively small range in western Mexico, this Woodpecker is dependent on healthy oak and riparian forests. Since it is one of the primary cavity nesters in this area, it is responsible for providing nest sites for a large number of additional species. Its precise habitat and area requirements and how these might vary across its range are very poorly known. 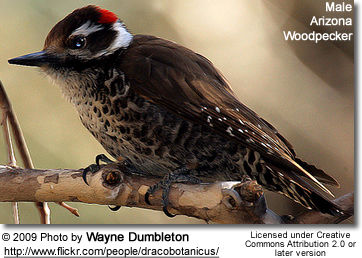 Ssp. stricklandi was formerly considered the southern form until the 42nd supplement of the American Ornithologists Union (AOU) checklist (2000) officially split them into two separate races.

Many Woodpecker species dwell in Arizona, and each one can be identified by its own distinctive markings. There is a striking resemblance between the Arizona and the Strickland's Woodpeckers.

The plumage of the Arizona is unique. It is the only species to display brown and white underparts; all the others have black and white coloration. The rump is a very dark brown, while the white underparts sport brown speckles. Arizona Woodpeckers usually exhibit white bars on their wings and have two white streaks above the eye which connect to a white bar on the neck. The male also has a red patch on the nape which is not shared by the female. The tail is a dark brown-black, and the outer rectrices exhibit white bars.

In the adult male, dark ear coverts are surrounded by a broad white stripe that links to white "tufts" near the cere and are bordered below by a black stripe. The throat and underparts are white with neat, brown-black speckles.

The female is similar, but the nape is completely brown.

The juvenile’s plumage is similar to that of the adult female, but it has the red crown.

The Arizona grows to about 7 to 8 inches in length.

The Arizona Woodpecker’s feeding habits have not been totally identified, but the birds appear to forage primarily on oak trees for larvae and adult insects, beetle and their larvae in particular. They search by probing or prying and flaking off bark rather than hammering. They also enjoy fruits and acorns.

Their foraging generally begins near the ground, and as they quickly work their way up the tree, they will fly from high in that tree to the base of the next tree. They climb up the trunk and onto smaller branches, all the while prodding for insects. They consume the insects as they expose them and then move on to another area of the tree.

Some sources claim the Arizona is limited to a very narrow area in the southern part of the state; others state that the bird is found in the entire state. Like all Woodpeckers, it
engages in drumming and drilling activities and hollowing out cavities in trees. But unlike most other Woodpeckers, it nests in cacti as well as in trees.

Courtship displays consist of a fluttery “gliding” display in flight during which the wings are held in place as the bird glides toward the mate at the nest. This occurs close to the end of nest-building. The male then drums and taps at the nearly complete cavity.

The nesting activities take place between March and June, when the birds hollow out their nesting/roosting cavities. They will aggressively defend their nesting territories from other Woodpeckers and any other animals that approach. They are particularly antagonistic toward intruding conspecifics—the male fends off other male Woodpeckers and the female fights off other females. When one member of the pair is engaging in this forceful activity, the other observes but does not join in the conflict. Each will only engage the member of its own sex.

The Arizona begins building its nest in mid- to late-April. The pair will hammer out their nesting holes in the dead limbs of both evergreen oaks and deciduous trees, primarily sycamores, cottonwoods or walnuts. Agave stalk has been used from time to time by these birds as well. They will build their nests in a range of altitudes, usually from 12 to 20 feet (3.5 to 6 meters), although heights of from 7 to 50 feet (2 to 15 meters) have been recorded. Both parents join in hollowing out the nest cavity; it is about 12 inches (30 cm) deep and unlined.

The pair will raise only one brood per season, and in southern Arizona, most of the chicks survive. She will lay 2 to 4 white eggs, usually at the rate of one per day. Both parents incubate the eggs; they rarely leave the eggs alone, and this continues for two weeks. The altricial chicks will then hatch, and the parents feed them almost round the clock. By day 11, the chicks are alert and can hold their heads up, and by day 18 they are actively moving about the nest. After 24 to 27 days, they are fully feathered and are ready to leave the nest. The parents continue to feed the fledglings into July, at which time the young go their own ways.

The keech call is considered sharp and squeaky.

The rattle call consists of descending, grating notes. The rattle call is described as loud, long, and harsh, consisting of about 15 pitches; it can be heard when the bird encounters any disturbing situation. It is a contact call, given at regular intervals by both members of the pair. The male usually answers with a kweek or rattle call.

The peep call is its most common call and can be heard year-round. It is used by the bird in a wide range of situations. For example, it is used when the Arizona is defending its nest from challengers in its territory and when it is relieving its mate in the nesting cavity. The extended peep is characteristic for all subspecies

The kweek call can sometimes be mistaken for that of a Hairy and White-headed Woodpecker. It is most often used by the female when she answers the drumming or rattle call. It is a loud call, and the pitches can be delivered either in a series or as a single tone.

Tuk-Tuk-Tuk is the sound made by nestlings as the parents come in to feed them.