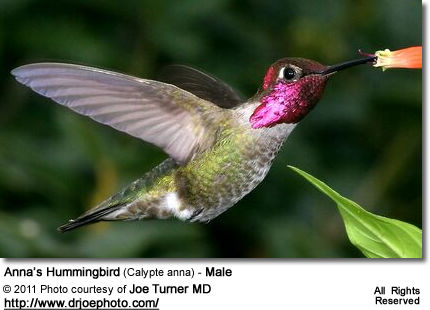 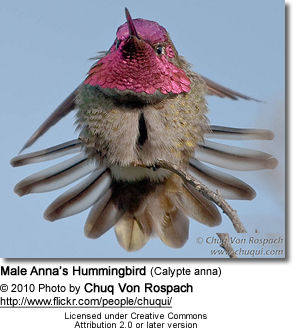 The Anna's Hummingbird (Calypte anna) was named after Anna Masséna, Duchess of Rivoli - the wife of a nineteenth-century bird collector, Duke Victor Massena.

It is one of only three species that are permanent residents of the US or Canada; the others being the Allen's and the closely related Costa's Hummingbirds.

These hardy creatures are the only hummingbirds to winter in northern climates, provided there are plenty of winter flowers to support them. It is the only North American hummingbird species with a red crown (top of the head).

It is the largest and most common hummingbird found in California; and the only one that produces a song.

These tiny birds are common within their range; and it is estimated that there are about 1.5 million of them in existence. In fact, their numbers appear to have increased as they have adapted well to urban development and have expanded their range in recent decades in and around towns and cities, particularly where gardens with garden feeders and ornamental flowers provide a suitable nesting and feeding habitat for them.

They are well known for their territorial behavior; the male makes elaborate dive displays at other birds and sometimes even at people. 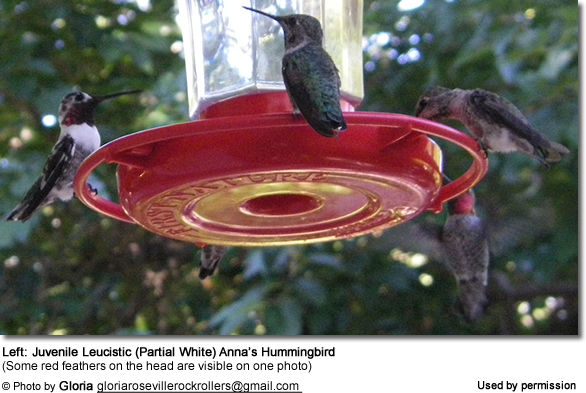 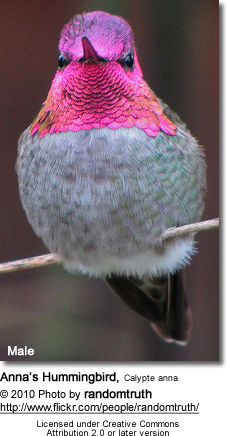 They were originally confined to Baja California in northwestern Mexico ranging to northern California, yet remaining west of Sierra Nevada. However, over the past 50 years, they have expanded their territory considerably, due to the planting of ornamental flowering plants and availability of garden feeders.

They are now also found in South Alaska, southern Canada (British Columbia where they are resident on Vancouver Island), Saskatchewan in South-central Canada and many of the central and eastern states of the United States.

Those found within their normal range along the Pacific Coast are permanent resident; while those in the eastern part of their nesting range move westward towards the coast after the breeding season; and some of those will wander far to the east and north. This being said, large numbers of them migrate from California to winter in southern Arizona.

They typically remain in lower-level areas, but may move up to higher elevation mountain meadows with suitable flowering plants. They inhabit chaparral, open woodlands, fields, gardens and parks. 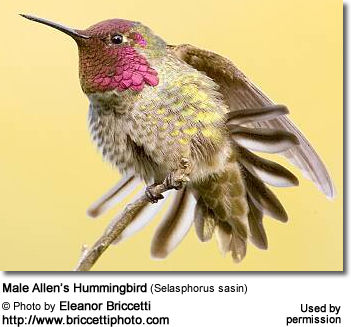 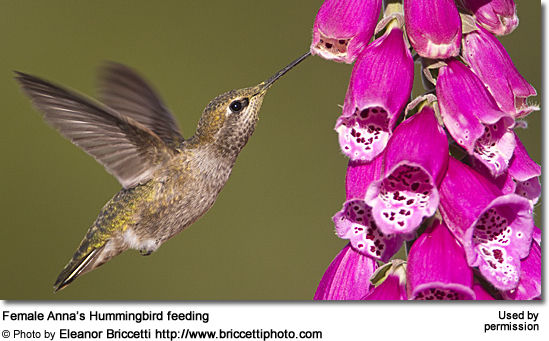 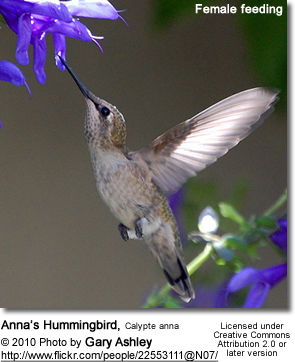 They use their long, extendible, straw-like tongues to retrieve the nectar while hovering with their tails cocked upward as they are licking at the nectar up to 13 times per second. Sometimes they may be seen hanging on the flower while feeding. Many native plants on whose flowers they feed heavily rely on hummingbirds for pollination. As these small birds thrust their long bills deep into the flowers for nectar their faces are dusted in pollen, which they then carry to the stigma of a nearby similar plant.

In winter, when flowering plants may not be readily available, they may drink the sap from holes created by sapsuckers, as a substitute for nectar. They may also visit local garden feeders for some sugar water, or drink out of bird baths or water fountains where they will either hover and sip water as it runs over the edge; or they will perch on the edge and drink - like all the other birds; however, they only remain still for a short moment. 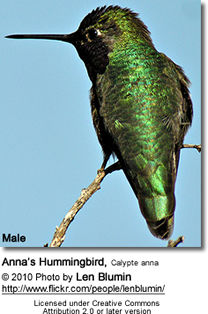 They also take some small spiders and insects - important sources of protein particularly needed during the breeding season to ensure the proper development of their young. In fact, the Anna's Hummingbirds consume more insects than any other North American hummingbird. Insects are often caught in flight (hawking); snatched off leaves or branches, or are taken from spider webs. A nesting female can capture up to 2,000 insects a day.

Males establish feeding territories, where they aggressively chase away other male hummingbirds as well as large insects - such as bumblebees and hawk moths - that want to feed in their territory. They use aerial flights and intimidating displays to defend their territories.

A PBS documentary aired first January 10, 2010 showed how Anna's aim for flying insects, then open their beaks very wide to catch them. That technique has shown more successful than trying to aim the end of a long beak at the insect.

The Anna's is one of the most vocal hummingbirds. Both males and females emit a simple toneless "chip" as they move from flower to flower, and the males produce a buzzy song during the breeding season. These vocalizations clearly distinguish them from the other, mostly silent, hummingbirds.

The male's song is a complex series of scratchy noises, sounding like a sharp "chee-chee-chee", which may be repeated for several minutes.

When mating or defending his territory, the male produces a high-pitched loud popping sound at the bottom of his dive, which is now thought to be made by its tail feathers (instead of its mouth). 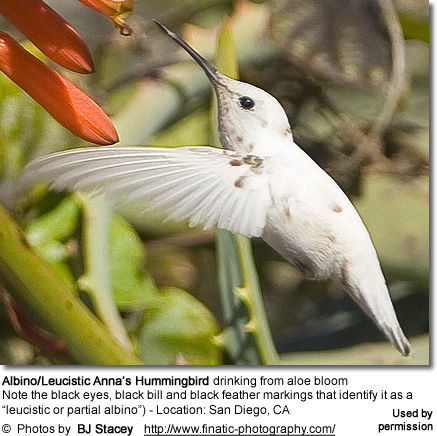