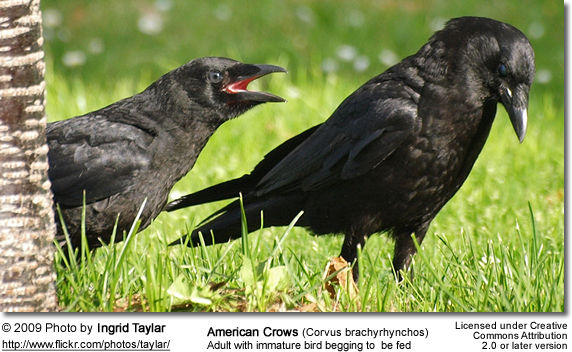 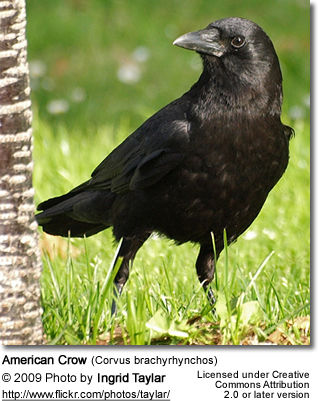 The American Crow, Corvus brachyrhynchos, is a common bird found throughout North America.

The American Crow has a iridescent black plumage. The legs, feet and bill are also black.

Averaging 18 inches (46 cm) in length, it is smaller than the Common Raven. American Crows have a lifespan of 7 to 8 years. Captive birds are known to have lived up to 30 years.

The most usual call is a loud, short, and rapid "caah-caah-caah". Usually, the birds thrust their heads up and down as they utter this call. American Crows can also produce a wide variety of sounds and sometimes mimic noises made by other animals, including other birds. 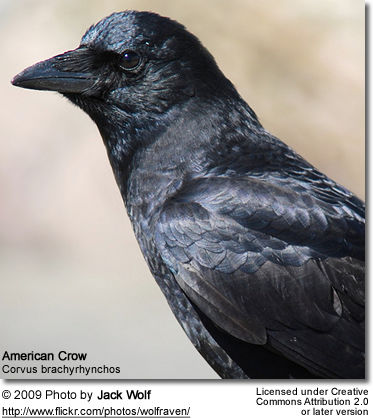 The range of the American Crow extends from the Pacific Ocean to the Atlantic Ocean in Canada, on the French islands of Saint-Pierre and Miquelon, south through the United States, and into northern Mexico. Virtually all types of country from wilderness, farmland, parks, open woodland to towns and major cities are inhabited.

The crow is generally a permanent resident, but many birds in the northern parts of the range migrate short distances southward.

Outside of the nesting season, these birds often gather in large communal roosts at night. 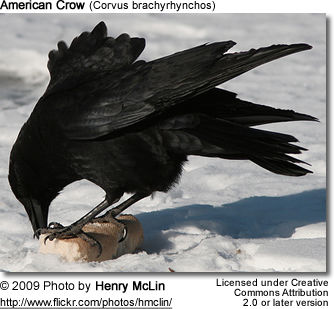 The American Crow is omnivorous. It will feed on invertebrates (insects, worms, etc.) of all types, dead animals, scraps of human food, seeds, eggs and nestlings, stranded fish on the shore and various grains. American Crows are active hunters and will prey on mice, frogs, and other small animals. In winter and autumn, the diet of American Crows is more dependent on nuts and acorns. Occasionally, they will visit bird feeders.

Like most crows, they will scavenge at rubbish dumps, scattering garbage in the process. Where available, corn, wheat and other agricultural crops are a favorite food. These habits have historically caused the American Crow to be considered a nuisance. However, it is suspected that the harm to crops is offset by the service the American Crow provides by eating insect pests. 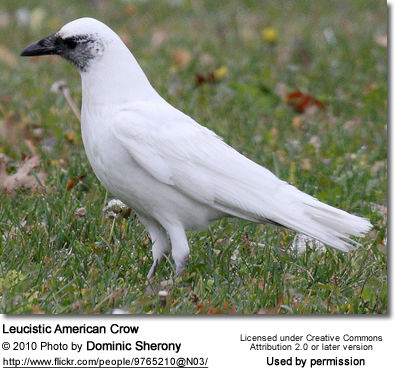 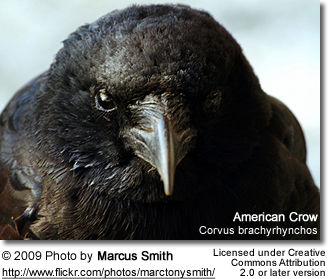 American Crows are monogamous cooperative breeding birds. Mated pairs form large families of up to 15 individuals from several breeding seasons that remain together for many years. Offspring from a previous nesting season will usually remain with the family to assist in rearing new nestlings. American Crows do not reach breeding age for at least two years. Most do not leave the nest to breed for four to five years.

American Crows build bulky stick nests, nearly always in trees but sometimes also in large bushes and, very rarely, on the ground. They will nest in a wide variety of trees, including large conifers, although oaks are most often used.

Three to six eggs are laid and incubated for 18 days. The young are fledged usually by about 35 days 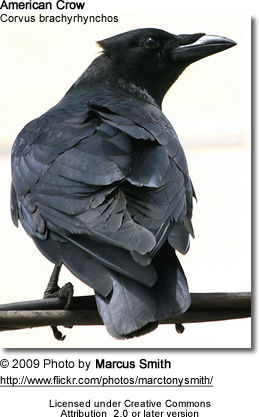