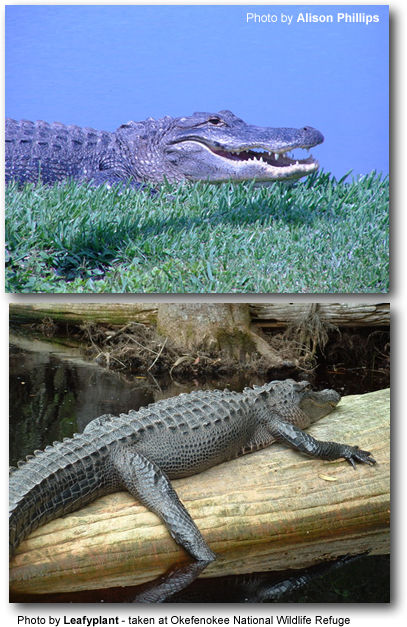 Having spent the past year in Florida, I have seen alligators of all sizes with a mixture of fascination and respect.  I am amazed at their size and, of course, the fearsome looking teeth.  I have seen the crocodilians (as the alligators, crocodiles, and their relatives are called) in many forms of activity…. nest building, jumping, swimming, eating, basking……I would say that most of their time is spent basking or curiously watching me watch them.

The crocodilians  are the largest of the living reptiles and most have complex behavior, displaying elaborate courtship rituals, nest building,  and establish a social orders.  These primitive animals are said to be relics of the great Age of Reptiles in which the reptiles known as dinosaurs ruled the earth.  However, today only 21 crocodilian species exist…Most of these are in danger of extinction due to man’s intervention.

The name alligator is derived from the Spanish word “el lagarto” meaning lizard.  Over the years, the word was corrupted to “aligarto” and then to the present term of alligator.

Crocodilians, like all reptiles are cold blooded, a term that implies that the body does not use a mechanism to maintain a constant temperature, thus resulting in fluctuating temperatures with that of their surroundings.

Alligators swim by folding their legs against their body, and propelling themselves with their tail by making sweeping motions from side to side.  They walk on all four and drag their tail.  They get off the ground and can move at a surprising speed.  I also have seen gators jump.  I was complete surprised  at how high they could jump…..They brought more than 2/3 of their total length above the surface of the water when it was trying to either scare the chicks in a heron nest that was hanging over the water or it was trying to frighten the chicks to make them fall from the nest an become a meal.

All crocodilians have four scent glands…one pair in the lower jaw and one pair at the opening of the cloaca.  The scents are use in courtship.

The appearance of the gator is a shape of a large lizard.  It has four short legs and wide spread toes…five toes on the front feet and four on the back feet….most toes are clawed and the toes of back feet are webbed.  It has a long thick tail with a ridge along the upper edge.  The hide is rough and covered in heavy black scales as an adult, but the babies are black on top with yellow blotches or stripes and a cream colored underside.  Both male and female look the same.

The head of the alligator is large and flat and elongated so as to be equipped with huge   jaws.  The jaws are hinged so that the mouth opens wide and, in doing so, they have a fearsome appearance with 80 sharp teeth showing….That is a estimate as I never desired to get close enough for an actual count.  The muscle of the jaw is so powerful that it can crush turtle shells and large mammal bones.

The eyes of the alligator face the side rather than the front.  They have a yellow iris and very good night vision.  Their eyes reflect light with a red orange color at night.  A personal story to exhibit this fact…..I was camping In Florida one night. I awoke in the middle of the night and could not go back to sleep, so I decided to drive to the beach and go for a walk.  As I drove down the back road to the beach, there was a gator in the middle of the road….as I approached it scurried off.  To try to see where was headed I turned my vehicle so the headlights were pointed in its direction.  I could see water and 50 pair of red eyes looking at me…….Alligators also possess a thin protective membrane that can close over their eyes which allows the gator to see clearly when submerged.  Located at the end of the snout, the nostrils look like bumps and have a special flat that closes them when submerged.  Like the amphibians, the alligator has no ears but only tympanic membranes located behind the eyes.  They are covered and protected by scaly flaps of skin.

Because of the positioning of the eyes, ears, and nose,  the crocodilians can submerge their entire body except for the top half of their head and still be able to see, hear, and breathe.  This is the position usually seen when their curiosity is high and they are watching something or someone.

The largest alligator ever recorded was in Louisiana measuring 19 feet 2 inches.  Growth rate and size depends upon the amount of food available.  Sexual maturity is dependent on size rather than age, and food supply plays a large role in the development  of young gators.  It has been said that the diet of an alligator consists of every living thing that flies, walks, crawls, or swims coming close enough to its jaws, and is small enough for them to kill.  All gators are carnivorous but sometimes swallow vegetable matter with their prey.  Food is swallowed by raising the head and snout and gulping.

Alligators also have a sound communication known as bellowing.  It is used as a means of locating each other in times of courtship.  One must remember that crocodilians are not very tall and their swampy habitat is filled with tall vegetation, and the gators cannot see each other.  Baby gators bark or grunt;  adults hiss and bellow.

Another courtship display is head slapping.  This is done by raising the head as if to bellow with the mouth open.  Instead of bellowing the gator drives its head to the surface and snaps its jaw shut just as the head hit’s the water. The large “pop” is the simultaneous sound of these two acts occurring.  Bellowing and head slapping serve to tell others of the crocodilians presence and location and prompts other individuals to approach for courtship.  This is the first phase of courtship.

The second phase of courtship is the pair formation phase.  The prospective male and female touch snouts, produce low barks and will swim side by side.  These behaviors all pass on the signals of nonaggression between the sexes.  If the pair is formed  courtship is continued by vocalization, snout touching, back rubbing, circling, bubble blowing, and spewing water from the nostrils.  If either partner of the pair is decides to “call it off”, they just swim away.

The third and final phase of courtship is the process of copulation itself.  This process can happen many times over a period of several days.

Courtship is governed strictly by air temperature and the courtship-copulation coincides with the egg and sperm production in the respective individuals of the pair.  After courtship the male disperses and the females begin the task of nest building.

Most nest building occurs in June or early July.  All nest are built above the water line as if the eggs are submerged for more than 12 hours the embryo will die.  The nest building is a very complicated, complex behavior.  Imagine the bulk and slowness of an alligator, clearing a spot in the swampy habitat that is 10 feet in diameter.  All vegetation is taken down and used as the base of the nest.  This is packed down by the momma gator constantly crawling over the nest.  Then mud and reeds from the waters edge are carried to the nest and again packed down.  This continues until the nest is 3 feet high.

The female then makes a small depression in the top of the nest.  She then places her back legs on each side of the depression and deposits her eggs.  She may lay 20-50 eggs depending upon her size.  The eggs are oval and white and about 2 ½ inches long.  After  the deposit of the eggs, she covers the eggs with the green and mud she dug from the depression and then goes to get more and covers the eggs with about a foot of reeds and mud.  When finished the nest looks like a haystack, 7 feet in diameter and over 3 feet tall.  The female will actively defend the nest from predators as raccoons, otters, wild hogs, skunks and bears, and man, that like to steal the eggs (adults have no predators except man).

The nest is used for more than just an incubation site.  It also is responsible for the deterioration of the egg shell.  The egg shell is made of several layers, with the outside layers being more calcified which protects the egg at time of deposit.  Acids from the bacteria in the mud, dissolve this calcified layer, leaving a softer, more porous shell which allows air to pass to the embryo and a shell much easier for the babies to break through with their egg tooth.

When incubation is close to being finished, the babies start emitting a barking sound from within the egg. When the female hears this, she starts to uncover the nest and allow the hatch to take place.  For those slower to hatch , she will assist them by rolling the egg in her mouth to soften the shell.  After all eggs are hatched, then the female calls her young as she leads them to the water. There they remain in a group called a pod, for up to two years.

Crocodilians are very important to the role of viable shallow wetlands.  The ponds and alligator holes are usually the deepest places in the wetlands and hold water after other areas have dried.  The ponds then give a place for the fish , turtles, insects, and other aquatic life to congregate.  This in turn makes a productive place for birds, raccoons, otters, and other mammals to feed.  These animals may also become food for the gators.  Their nest also become nest for turtles, whose eggs will be protected by the momma gator.  Most of the natural land above water level in the Everglades can be contributed to alligators.  Alligator trails become small channels for water to disperse throughout the wetlands.

I personally, do not fear the alligator, but I DO respect them.  They can move faster than one expects and can do harm to the human body.  Unless one has studied them and knows them, watch them bask and watch you from a distance.   Enjoy them as they are interesting animals.

A sampling of his credits include Nature Photographer Magazine, many state DNR magazines including covers, Tropical Fish Hobbyist, Journal of Health and Healing, several calendars and many brochures.