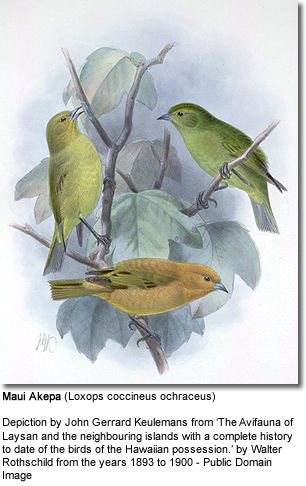 The Akepa (Loxops coccineus) is divided into three subspecies, only one of which, the Hawaii Akepa, remains today:

The Hawaii Akepa is a species of Hawaiian Honeycreeper that is found only in the higher elevation forests of Hawai'i.

This species is usually found above 1,100 meters up to 2,200 meters above sea level. This species is a large congregate and is often found in larger flocks with its own kind, and in mixed species flocks, particularly during the non-breeding season.

The female is duller: the plumage isa greenish grey color, with a yellowish belly.

The juvenile is similar to the female but smaller.

The Hawaii Akepa is found as three main populations one at Hamukau Volcano Area, upper forest areas of Kau and the northern slope of Hualalai. This bird's subspecies were once found on the islands of Maui and Oahu but these populations have vanished or at best are extremely rare. The Oahu population was found up till the early 1990s when much of its lowland forest had been degraded. The Maui population was found near the Haleakala Peak. This population was spotted at low numbers till 1992, where the last recorded sighting was document. There are still reports of a green yellow bird flying in the reserves pointing to the fact that there may be individuals remaining but this is very unlikely. Its close relative, the Akeke'e, or Kauai Akepa was once to be another subspecies of Loxops, but was evident in the 1990s that this bird was different in coloring, nesting, songs and degree of sexual dimorphism.

All the birds have an unusual crossbill that cannot be seen in the field, it is only noted in the hand. The Akepa uses its unusual crossbill to pry open leaf buds on the native Koa and Ohia trees to extract its arthropod prey hidden within.

This species is highly dependent on Koa and 'Ohi'a-lehua trees where it gets much of its food. The Koa trees provide most of the protein as many kinds of insects exist under the branches of this tree. Fretz (2002) suggests that this food source is only found in old-growth Hawaiian forests and could be one factor in Akepa population declines. The lehua blossom of the 'Ohi'a tree provides a source of nectar that this bird consumes occasionally.

They mostly breed from the winter to early spring, during this time the male and female pair go of in search of natural tree cavities. The Hawaii Akepa is the only native obligate cavity nester in Hawaii. Another unique honeycreeper, the Akiapola'au, fills the woodpecker niche by drilling holes in Ohia trees in search of sap, and in Koa trees in search of beetle larvae. By contrast, the Akepa seeks naturally-occurring cavities in the trunks of branches in which to nest. This bird goes off in large courtship groups as breeding season continues on, this is strange because this species makes permanent bonds. Another interesting thing is the fact for being such a small bird, it does not lay many eggs, usually one to two eggs instead of the three to five of other similar sized species.