These owls have a wide range, in which they are generally common.

They mostly inhabit Savannah woodland, and bushy and scrub areas. They are urban dwellers as well, making their homes in parks, gardens and in abandoned buildings 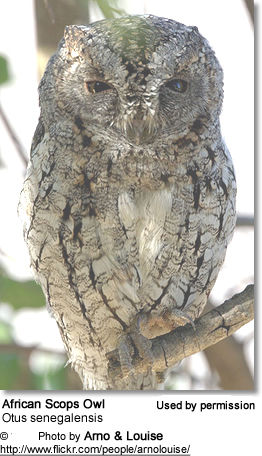 African Scops Owls are relatively small, measuring 17 - 19 cm in length and weigh around 65 grams. Like most owls, they have ear tufts. The head and the back are grey, and the throat is white. The bill is black and the feet brown.

Their yellow, forward-facing eyes are nearly as large as human eyes and are immobile within their circular bone sockets. For this reason, owls need flexible necks, as they have to turn the entire head to change views. They have the same number of vertebrae in their necks as most mammals and can move their heads 270 degrees in either direction (nearly all the way around!). Most other bird species have their eyes on the sides of their heads enabling them to see sideways and, to some extent, backwards. Owls, on the other hand, have both eyes in the front which enhances their depth perception.

Owls have 3 protective eyelids. One upper lid that closes when the owl blinks, one lower that closes when the Owl sleeps; and a third eyelid - called a nictitating membrane - a thin layer of tissue that closes diagonally across the eye, from the inside to the outside. The purpose of these membranes is to clean, moisten and protect the surface of the eyes.

The African Scops Owls are monogamous - typically remaining with the same mate for the rest of their lives. Most breeding activities occur from April through June.

Nests are typically placed into tree cavities, although sometimes ground nests are used for breeding.

They mostly feed on insects and spiders, but will also take small mammals, such as rabbits, field mice and other rodents. Flying insects are often caught aerially and eaten in flight. Mammals are usually taken from the ground. Larger prey is taken to a secluded perch, where it is killed, torn into smaller pieces and eaten.

The African Scops Owls' calls consist of a series of hollow, dove-like "prrrp" notes , which are repeated about every 5 seconds. This species is most easily recognized by its call.