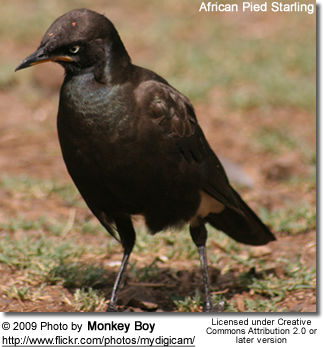 The African Pied Starling, Spreo bicolor, is a bird endemic to South Africa, Lesotho and Swaziland. It is common in most of its range, but largely absent from the arid northwest and the eastern lowlands of South Africa. It is found in open habitats such as grassland, karoo scrub, thornbush and agricultural land, and often associates with farm animals.

The adult of this 27–28 cm long starling has mainly dully glossed black plumage except for a white lower belly and undertail. It has a white iris and yellow lower mandible.

The sexes are alike, but the juvenile has unglossed plumage, a brown iris and a dull yellow lower mandible.

There are no subspecies.

This species has a number of calls, but the most familiar is a skeer kerrra kerrra. There is also a soft warbling song.

The African Pied Starling usually nests in tunnels in river banks, but will use holes in buildings, straw bales or natural tree holes. There is a record (Brooke 1995) of a nest being constructed in a wrecked ship 200 m from the shore. The nest is lined with a wide variety of plant material and items of human waste such as paper and rope. The 2–6, usually four, eggs are blue-green, immaculate or with some red spots.

The female alone incubates for 14–16 days, and the chicks fledge in another 22–28 days. Both parents feed the chicks, assisted by helpers, which are typically subadult or unmated birds. This cooperative breeding is reinforced by mutual allofeeding between adults, behaviour reinforced by the bright gape, a feature normally lost in adults of most bird species.

This starling is commonly double-brooded. It may be parasitised by the Great Spotted Cuckoo and Greater Honeyguide.

The African Pied Starling is gregarious and when not breeding will form large flocks, sometimes numbering more than 1000 birds. Its roosts may be shared by Lesser Kestrels or Wattled Starlings. It will feed with European Starlings, but they rarely roost together.

Like other starlings, the African Pied Starling is an omnivore, taking a wide range of invertebrates, seeds and berries, but its diet is mainly insects, including many ants and termites. It will take figs from gardens and some human food discards. Foraging is frequently near livestock, with birds feeding on insects disturbed by the animals and also perching on cattle or sheep to remove ectoparasites.

The African Pied Starling has sometimes been seen as a pest when it takes soft fruit such as grapes or figs, and was also itself considered good eating. However, it is little persecuted at present.

This species has a large range, estimated at 790,000 km². The population size has not been quantified, but it is believed to be large as the species is described as 'common' in at least parts of its range. It is not believed to approach the thresholds for the population decline criterion of the IUCN Red List (i.e. declining more than 30% in ten years or three generations). For these reasons, the species is evaluated as Least Concern.